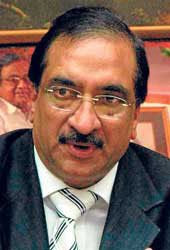 UCO Bank might be facing complex challenges in capital restructuring, margins, and non-performing assets, but its social commitment to ensure financial inclusion for all is worth mentioning. Chairman & Managing Director SK Goel explains to Seasonal Magazine the strategies for maintaining this balancing act at UCO in the coming quarters. With capital restructuring entering its last phase this year, a planned FPO, and new strategies to tackle problem areas like NIM & NPA, FY 09-10 might prove to be a landmark year for UCO Bank.

Kolkata headquartered UCO Bank is one of India’s leaders in banking that meets the country’s complex social commitments. For example, UCO’s advances to the priority sector during 2008-09 constituted more than 50% of its total advances, and this public sector bank (PSB) also met all its lending commitments to the agricultural and weaker sections of the society. UCO Bank is also a two-time national award winner for lending to micro enterprises.

But such socially committed policies come with a price. UCO was one of the first banks to be recapitalized by the Government as soon as the downturn happened, as its Capital Adequacy Ratio (CAR) needed improvement.

UCO Bank’s Chairman & Managing Director SK Goel is a veteran banker of India, but also known for his non-conformist attitude with the industry. Under his leadership, UCO is trying to be more customer-friendly with new-generation features like no-holiday branches and express services.

Chairman Goel is also known to think from customers’ shoes, and his recent advice for existing home loan customers – a disenchanted lot in India as elsewhere – were enough to evoke a smile, if not renew hope. He asked home loan customers burdened with a high interest rate to try bargaining with their banks for a lower rate or move the loan elsewhere that offered better rates. Goel further explained that these were not unfeasible options as no bank would opt to lose a customer in whole, but would prefer lesser profits.

SK Goel’s leadership qualities have influenced UCO Bank positively, and it was with great pride that UCO, the lead banker (head of the State Level Bankers Meet) for Himachal Pradesh, announced that the state has become the country’s first in ensuring 100% credit inclusion for all households.

To meet this and other challenges, UCO is focusing more on productive markets like the Indian state of Gujarat. The bank already has a significant presence there, but wants to double it within the next two years.

But in dealing with India’s state governments, UCO Bank has proved more than once that it has a mind of its own. Recently, it turned down a West Bengal government initiative to participate in a bank consortium to deliver Rs. 500 crore to fund land banks for industrial units. UCO cited its inability as due to a policy of not directly funding land acquisitions even if the acquirer is a state government. Considering Bengal’s poor track-record in industrial development, UCO Bank’s decision appears to be safe even otherwise.

To better the financial health of UCO Bank, a major restructuring process has been on for some time now, and is expected to enter its final leg this fiscal. The bank has already been infused with Rs. 450 crore by the Government in 2008-09, and will receive another Rs. 750 crore this year.

UCO recently got a boost when CRISIL upgraded their rating on the bank’s lower tier-2 bonds from AA to AA+, based on continued central government support to the bank.

As part of the ongoing restructuring, UCO Bank needs to raise around Rs. 500 to 600 crore on its own, out of which Rs. 136 crore is expected to come from a Follow-on Public Issue (FPO) late this year. The bank needs to manage the FPO perfectly, as a similar move last year had to be abandoned due to adverse market conditions.

UCO is getting into the general insurance business this year by floating a new company that will have other domestic and foreign entities in this sector. The bank plans to hold a 30% stake in the new entity.

UCO Bank grew its total business by 25% in 2008-09 to reach Rs. 1,69,890 crore, and plans to grow it on similar lines to Rs. 2.02 lakh crore this year on an expected credit growth of 25%. Profitability for the first quarter is already up by 15% over the corresponding quarter last year.

UCO’s footprint in India is significant, both geographically and sector-wise. The 66 year old bank has 2065 branches across the country and lends to all sections of the Indian economy - micro, small, medium & large enterprises, and spanning all sectors including retail, agriculture, services and infrastructure. UCO Bank has presence in Singapore, Hong Kong, China, and Malaysia, and correspondent arrangements all over the world.

UCO Bank’s Non Performing Assets (NPA) level stands above 1% and it is a prime challenge before the bank. Lately, the bank has started showing successes in its NPA battle.

Sale of NPAs depends upon the quality of the assets. It is not entirely true that ARCs show poor interest in cash transactions. Where the asset quality is good, UCO Bank does prefer and can demand cash sales over security receipts as SR is a long-term process and offers no certainty of realization. UCO has been quite successful in negotiating good terms with ARCs.

How do you assess the financial health of UCO Bank vis-à-vis its peers? UCO has challenges on both the Net Interest Margin (NIM) front and the Non Performing Assets (NPA) front…

There are challenges, but UCO Bank has made headway on both fronts, lately. Speaking about NPAs, for the first time in recent past, in FY 08-09 UCO’s total recovery from NPAs other than write-offs was higher than fresh accretion of NPAs thereby achieving a reduction in absolute NPA numbers. Our NNPA to Net Advance Ratio which was 1.98% as on 31.3.08 has come down to 1.18% as on 31.3.09. This has been achieved despite difficult economic condition prevailing in India arising out of the global financial meltdown. And UCO Bank continues to employ a two-pronged strategy on NPAs – firstly, better NPA management through recovery from stressed assets, and secondly, prevention of further slippages of assets. On the NIM front too, we are pursuing a dual strategy of putting maximum stress on mobilizing low-cost deposits, even while reducing our cost of funds.

Concerns have recently been raised about PSBs including UCO Bank resorting to mass restructuring of loans to temporarily clear NPAs from the balance sheet. But won’t they come back to haunt you in the next balance sheet? What is your take on this?

Restructuring was a one-time initiative declared by Reserve Bank of India (RBI) in the second half of financial year 2008-09 to counter the spillover effects of the global downturn which affected the otherwise viable industrial units and projects. This enabled banks to maintain credit quality. Most of the restructuring exercises undertaken by UCO Bank were outcomes of RBI guidelines on this matter. As a follow-up measure UCO has also put in place proper monitoring mechanism to keep the restructured accounts under strict vigil and prevent slippages to NPA category.

How will you counter the allegation that public sector banks’ (PSBs) performance is largely driven by government compensating for non-performing agricultural loans, as well as large government funds like the National Rural Employment Guarantee (NREG) switching to PSBs for disbursement, thereby forcing millions of hitherto unbanked to open accounts?

One has to understand that public sector banks in India are instruments of social change for the country apart from being business organizations. PSBs are mandated to undertake priority sector lending of which agriculture lending is a part. The Government’s relief measure to farmers by way of ADWDRS is a welcome relief to farmers who have been struggling to repay their loans for various reasons. For UCO Bank the proportion of NPAs out of the eligible amount is relatively small. Regarding the second part of your question, it is a universally accepted fact that financial inclusion is a pre-requisite for upliftment of the poor and the marginalized. Taking banking to the unbanked is a part of that process and disbursement of funds under NREG scheme through banks is meant to ensure proper delivery and prevention of leakages.

UCO Bank was one of the first banks to be recapitalized by the Government as soon as the downturn happened, and reportedly needs another round of fund infusion shortly. How did your Capital Adequacy Ratio (CAR) come to be lower than some of your peers?

During FY’08-09, UCO Bank continued to remain BASEL-II compliant with Capital Adequacy Ratio (CAR) at 11.93 per cent as on 31.3.2009. It is relevant to observe that UCO is Basel II compliant as we have international presence. RBI has also concurred with us that only Basel II CAR is applicable for UCO Bank from 31.3.08. There has been a change in the overall capital structure of UCO during the financial year 2008-09. UCO Bank has during the year restructured its capital as per the Capital Restructuring Plan approved by the Government of India. In accordance with the plan, a sum of Rs. 250 crore out of the total equity capital of Rs. 799.36 crore has been converted into Perpetual Non-Cumulative Preferences Shares (PNCPS), thereby reducing the total equity share capital of UCO to Rs. 549.36 crore and resulting in the consequential reduction in the percentage shares held by the GOI from 74.98 per cent to 63.59 per cent. As per this plan, Government of India would be subscribing a sum of Rs. 1200 crore in innovative capital instruments of UCO Bank , in two tranches of Rs. 450 crore and Rs. 750 crore during the years 2008-09 and 2009-10 respectively, to strengthen the capital base of the bank. UCO has already received Rs. 450 crore during March 2009 and has accordingly allotted PNCPS to the GOI.