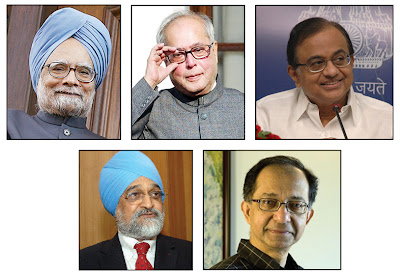 Despite repeated efforts to deflate, prices are getting inflated. Either it shows the incompetence of leaders like Dr. Manmohan Singh, Pranab Mukherjee, & P Chidambaram, as the Opposition says, or there is something else to the economy, something that remains hidden to most of us.

The secret might well be this - nobody in central policy-making really cares a damn about inflation. But not necessarily because of apathy or ignorance. With almost half gone from its second-term, and considering the time taken to turn around economics, UPA clearly cannot afford apathy. And anyone who knows the rudiments of economics knows that inflation can very well be tamed by cutting down on government spending, or specifically in the post-2008 context, rolling back the fiscal stimulus.

But the central policy makers aren’t willing to even consider these steps. Why? Because, they really don’t care a damn about inflation.

Just recall what the other Singh told press recently, “Inflation is one thing I am least worried about…” And it is not just Montek Singh Ahluwalia's take on this. Kaushik Basu, FinMin’s Chief Economic Advisor recently said, “We want to take steps to bring down inflation but we do not want to be so single minded in bringing down inflation…”

The political leadership, on the other hand, can’t be as clear as bureaucrats. But the intentions should be clear to all. Now only the question of ‘why’ remains, given the stark unpopularity of inflation.

Chances are that this team, led by Dr. Manmohan Singh, want to go down in history as the men who finally guided India into the right economic track that a developing nation should take to become a developed nation.

Why, don’t all of us want to live in a developed nation? Don’t we want India to be a developed nation like US or UK? Yes, yes, yes. But, sadly, we haven’t yet understood that this transition, this growing-up is going to be intensely painful.

To give just a glimpse of this pain, it is enough to realize that there is still room for more inflation. Because, for all of India’s high inflation rates now, realize once and for all that the cost-of-living index in USA (computed as consumer prices including rent) is still 177% higher than in India. In UK, it is 236% higher than in India!

Of course, Indians and Americans don’t earn equally. But not only is this difference smaller, but it is getting smaller by the year. For example, the local purchasing power of Americans is now only 98% higher than Indians. And in the case of Englishmen, local purchasing power index is even smaller - only 57% higher than in India now. These numbers are even more significant, taking into account the better savings culture of Indians vis-à-vis Westerners.

Clearly, room for further inflation is there if we want to end up as a developed nation. And the only thing that can offset inflation is earnings growth, and if earnings - of individuals, families, companies, governments, and ultimately of the nation - doesn’t keep pace, any and all of these social units will be in deep trouble.

And for earnings to grow, productivity should grow, and that is why the team led by Dr. Manmohan Singh is madly after GDP growth. That is how USA grew itself in the post-WW2 era, always striving to keep annual GDP at high single digits, if not low double digits, and suffering high inflation as the outcome. And now, with USA and other developed countries growing at low single digits, Dr. Singh and his team rightly thinks that if we continually grow at high single digits, we can successfully play catch up.

In contrast, if growth is slowed down, inflation will in no doubt come down, but so will employment rate, and so will APL percentage. In fact, studies have shown that with each declining growth percentage (that will tame inflation), the country will see unemployment levels inching towards 20%, and the failure to raise another 100 million people from BPL status.

Simply put, the secret is that India has voluntarily opted for high-growth / high-inflation economics. Amongst the BRIC economies, while India and China are following this method, Brazil and Russia have opted for the low-growth / low-inflation route. Only time will tell which route was best, but the bad thing is that our leaders don’t have the guts to announce what they have chosen.

The pains arising from this non-disclosure is apparent. For one, if it were disclosed, people would at least try to earn more rather than wait endlessly for onions to be cheaper. Only God knows what would be the overall hit if and when diesel is de-regulated.

Behind the veil of apparent indecisiveness, the real decisiveness of the Government - may be the only thing it is decisive about - in ensuring a high growth / high inflation cycle is unnerving.

It is slowly becoming clearer that the ongoing equity market correction is not just about interest rates edging higher, but more to do with Government’s subtle unwillingness to control inflation by curbing growth. The high growth / high inflation cycle is clearly not favoured by FIIs, which is clear from the way Indian and Chinese indices have nosedived while indices in other emerging markets like Russia have soared over the past two months.

Will Dr. Manmohan Singh and company eventually succeed as history makers? They may, but if, and only if, they are also willing to admit that development is not only about economics, but about rooting out inefficiencies, bottlenecks, and ultimately, corruption.

For example, despite being the world’s second largest producer of vegetables and fruits, 25% of our produce goes as waste. Coming to cereals and pulses, the waste is smaller but still a sizeable 7%, enough to correct an ad-hoc price hike due to any supply side crunch. It is also highly unlikely that our investigative agencies have uncovered and busted the myriad ways in which hoarding and futures exploit the demand side which is getting stronger in the country.

And if growth is also about empowering the country’s largest profession, farming, the country’s track-record in this is pretty poor, with Indian farmers struggling to get at least one-third of the final retail price.

It is economy that needs to grow, but often it is not only economics that is involved.
Posted by Seasonal Magazine at 12:24:00 PM