Why India & USA Worry as Pakistan & China Get Cosier 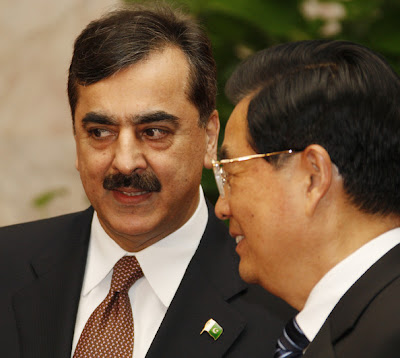 Here is a recent quote for you: "Pakistan has made very important contribution to international counter-terrorism cooperation, as well as great sacrifices." If you thought that was by George W Bush a few years ago, or by Hillary Clinton now, sorry, you are wrong.

That was by a 47-year old woman called Jiang Yu. And no, that quote wasn’t pre-Abbottabad, but very much after the world’s most wanted terrorist was neutralized in Pakistan, who was not living in a hole like Saddam, but in a plush mansion in one of Pak military’s favourite garrison cities, barely 115 km from Islamabad. Yes, it is official: China is Pakistan’s new USA.

Welcoming an internationally beleaguered Yusuf Raza Gilani to Chinese soil, the Chinese Foreign Ministry Spokeswoman continued, and almost sobbed for everything Paki: “Indeed, Pakistan is the victim of terrorism.” International grapevine is that if Obama cuts the aid lifeline to Pakistan, China is ready as a replacement. It is time for India to be alert.

Isolated and mocked by the US military raid and the subsequent international outpour against it, Pak’s military and intelligence establishment were quick to bark at a nation that has never meant it any harm, nor mocked it even after Abbottabad.

While General Kayani warned India that any “misadventure of this kind will be responded to very strongly”, Foreign Secretary Salman Bashir warned of a “terrible catastrophe”, and even the most criticised official, ISI’s Ahmed Shuja Pasha too joined in saying, that any Abbottabad-like attack by it would invite a befitting response from Pakistan as targets inside India "had already been identified" and "rehearsal" carried out.

Pasha can be ignored because he is the guy who came to know of Osama’s killing from TV - like all of us - despite being that nation’s all powerful intelligence chief. We shouldn’t be too much concerned with the threat of someone who couldn’t save his best friend on his D-Day.

Anyway, India had a good retort this time. Our Foreign Ministry said, "We understand their problem. In fact, we sympathise with them. Our advise is, please concentrate on your domestic problems rather than looking towards us," the official said, pointing to the scores of terrorist strikes taking place in Pakistan everyday, including killing of a Saudi diplomat in Karachi recently. The Spokesman also added that the Indian armed forces are fully capable to thwart any Pakistani misadventure.

But what was the instigation to the Pakistani outburst? Of course, General VK Singh and Air Chief Marshal PV Naik had recently said in no uncertain terms that Indian Army & Air Force were equally capable of carrying out US-style surgical strikes against outfits like LeT that are housed in Pakistan.

Many doves in the Indian intelligentsia would find fault with our Generals’ words, but if these Generals hadn’t told that after Abbottabad, they wouldn’t be men, let alone men who guard the country. They can’t and shouldn’t be expected to speak like Dr. Manmohan Singh or AB Vajpayee. It is a great thing that Indian military asserted its moral right and capability to annihilate terrorist elements in Pakistan that have killed thousands of innocent Indians.

Of course, many Indians don’t believe that India is capable of surgical strikes inside Pakistan. But why then is Pakistan worried? Simply because they haven’t forgotten what India is really capable of. Forget petty things like surgical strikes, India has in the past carved a new nation off Pakistan, when a double-headed Pakistan became too much of a trouble to our peace. And they haven’t forgotten that it didn’t even take a man to do it.

But the real reason why Pak officials were worried this time might be something else. Already there are reports that it was Indian intelligence agencies that provided US with the crucial tip-off about Osama’s den. This seems very much plausible as Islamabad and its neighbourhoods are areas where Indian intelligence has better access due to geographical proximity. If India was indeed behind the tip-off, there is no doubt that our agencies had taken a definitive step in neutralizing someone who had threatened India multiple times with September 11 style attacks. This kind of silent strategy by India was also visible when Sri Lanka neutralized Rajiv Gandhi’s killer.

There should have been another master stroke from India this time, if not for an unpardonable bureaucratic goof-up. When the incredulousness of Osama living comfortably in Pakistan all these years was fresh in everyone’s mind, India delivered its 50 Most Wanted Fugitives List to Pakistan. Though outright blunders regarding two names in this list, caused it to be embarrassingly withdrawn, this list reminded the world community again that the likes of Dawood Ibrahim are still living comfortably in Karachi. It is also noteworthy that through this list, India exposed around five military officers of Pakistan who have abetted terrorist strikes in India.

But what should worry India really is the stronger alliance of Pakistan and China. For the first time in several years, India’s huge military expenditure is beginning to make some sense. Both these nations have attacked us multiple times before, and when they get cosier, have no doubt, it is against India.

Expect American overtures to us soon. Pressure is mounting on Obama as well as the Republican hawks to see Pakistan for what it really is, and not what America thinks it is. Pressure is also mounting on US leaders to align with the only true democracy in the region. An Indo-China standoff is also attractive to US arms companies, that influence Washington’s international policies unabashedly. But the challenge before US is that we won’t gobble up their fighter jets and other wares at grossly unfair prices.

Coming to think of it, both Pakistan and China have reached the very limits of foolishness by spending 2.8% and 2.2% of their respective GDPs on military. For China it amounted to a whopping 4 lakh crore rupee last year. For what? Fearing that India would attack them? They foolishly forget that India has never attacked any nation, even before democracy came in. But India has every reason to be more wary about these neighbours than ever before.

But we should also remember to differentiate between a nation’s people and its administration. People of Pakistan shouldn’t be equated with their rogue military. Similarly, the Chinese people shouldn’t be equated with their rogue Communist Party. A day will come in these countries when people power will overthrow these autocratic scoundrels, and India will get recognized for its fairness and friendliness. But until that day, India needs to be on its toes. Not just by keeping military spend high, but by promoting cross-border trade and cultural interactions, and continuing the dialogue. Already, a good voice is being heard from Pakistan, with Nawaz Sharif calling for an end to considering India as an enemy.
Posted by Seasonal Magazine at 1:02:00 PM