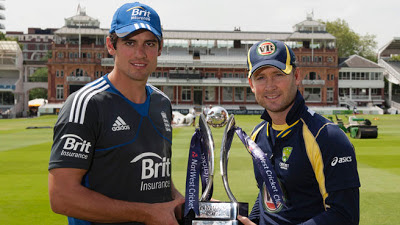 Britain has witnessed some outstanding sporting spectacles in the past month, with their representatives proving to be heroic achievers this time around. The last edition of the Champions Trophy bid farewell to the world, after putting up its final show of excitement and passion, fittingly in the home of cricket. England came within touching distance of winning the ultimate showdown only to find themselves deprived of a happy ending by India. The fans then solidly backed their only indigenous product featuring in the list of top 200 tennis professionals in the men’s ranking, Andy Murray, who created history by winning the Wimbledon. It was however more of desperation than history. As if celebrating Murray’ victory wasn’t enough to see off this week, the English crowd is already preparing for more exciting months ahead. Now the focus shifts back to cricket where the arch-rivals England take on the Australians in the mother of all test battles: The Ashes series 2013. Here are some interesting and possible on-field rivalries which would certainly invigorate the famed Barmy Army and the millions of viewers all over the world, in what promises to be a riveting competition. Let us hope that these one-on-one bouts are carried out within the space of 22-yards:

The England captain has seen a meteoric rise ever since he took over the reins and ensured that his batting has improved simultaneously with his leadership abilities. Opening the batting for England, Cook will look to construct those laborious centuries in the company of his batting colleagues. Pattinson’s injury woes are as erratic as his performances have been for Australia lately. However, the exciting fast bowling talent will hope to steam in hard and capture those prized English wickets if Australia wants to get a head start into the series.  Cook has played remarkably well against pacers early on in the innings but his tendency to flash at balls outside the off-stump will be in Pattinson’s mind. If Pattinson can wreck early havoc by unsettling the English captain in helpful conditions, then he will have sent alarm bells ringing in the English camp.

The exciting return of Pietersen augurs well for his team. His dominating batting skills and exemplary aggression will surely come in handy against a pace-inclined Aussie attack. Pietersen  plays at the crucial No.4 spot due to which he may have to tackle the spin of Lyon if at all Australia plans to draft him into the playing XI. Before that, Pietersen will have to riddle out Siddle’s plan for him. The lion-hearted right-arm fast bowler is the most experienced of Australia's pace battery and is expected to lead the bowling unit in the series. Siddle knows that the man he has to contain is no lightweight either. The contest between the two is sure to be gripping.

Trott has always looked to play his natural game, which at times has come for heavy criticism owing to its slow approach. But that is just what England expects out of him. He is designated to play the anchoring role during the batting innings, coming in at the challenging No.3 slot. Trott is also a tremendous stroke-maker with the ability to play both spinners and pacers with equal finesse. The tall and lanky Starc will look to go all out at Trott peppering him with discomforting short-pitched deliveries. Starc in all likelihood will be the first change bowler for Australia, who possess arguably the best reverse-swinging skills in the current Aussie pace battery.

The Aussie captain will need to be at his best when he takes on the crafty guile of Graeme Swann. Clarke is known to be an excellent player of spin. However, Swann is one of the most successful bowlers currently in world cricket, who has thrived bowling in English conditions. Clarke loves to come down the track and use his feet against the spinners while Swann has been a great exponent of off-spin bowling, always looking to flight the ball and inviting batsmen to play on the front foot. Batting in the middle-order, Clarke will mostly find himself dealing with Swann thereby ensuring a keenly fought contest between the two.

This is yet another mouth-watering clash. Anderson has been impeccable with his line and length having bowled with rattling speed and control. He will look to exploit the swinging conditions when he battles it out with Australia’s batting mainstay, Shane Watson. The burly right-hander will look to tackle his counterpart with watchfulness in the initial stages and would then look to play in his own fluent style. The success and failure of Watson will hugely impact the prospects of the Aussies but he is undoubtedly up against  the best swing bowler around. Anderson, on the other hand would want to sent shivers down the spines of the Aussie batsmen by curbing Watson’ playing instincts, whose run-making will be vital to Australia’s chances for excelling in the batting front.
Posted by Seasonal Magazine at 6:58:00 PM
Labels: Cricket