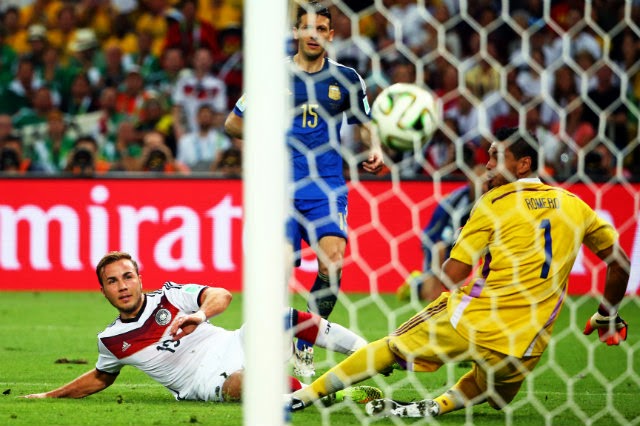 As the streets of Berlin erupts in joyous celebration on Phillip Lahm lifting the much coveted FIFA World Cup, it marks the end of a truly magnificent tournament for the Germans. A scenario of 'so close yet so far' emerges in the hearts and minds of the Argentinean supporters as their heroes crumbled down in the final hurdle. The Prodigal Son of Argentina, Lionel Messi, did look threatening but he couldn’t lift his team against the might of the Germans. Mario Gotze with an outstanding cross shot with his left foot rose to be the man of the moment for the footballing world. With a hard-fought win in the finals, the Germans have shed their chokers tag and they earn back the trophy that they have lifted three times in the past.
This World Cup has witnessed sparkling footballing action and has ended on a high after a valiantly fought final. But like every other tournament, this World Cup too had its share of the good, the bad, and the ugly.
Let us start with the highest goal scorer of the tournament. Although he coudn’t carry his team past the quarterfinals, the highest goal scorer remained the young Columbian, James Rodriguez. With 6 goals in his kitty, it was quite interesting to watch whether Messi or Mueller will  surpass his tally, but they both faltered. Despite losing their star player, Falcao, to an injury, Columbia did manage to perform  over their potential and finished in the top 8. Their main man was James Rodriguez who has taken Brazil by storm with his quick footed finishes in the field. This young man can surely stand tall and proud after an extraordinary tournament and it won’t be surprising if the following months see a top club spending millions for this wonder kid. Playing his first World Cup, Rodriguez must have been a name the world was unaware of but in the one month long tournament he has become every football fan‘s favourite.

Another big achiever of this tournament has been the record breaker, Miroslav Klose, who has defeated the record of Brazil’s Ronaldo to become the highest goal scorer in World Cup football. Hailed as one of the most lethal assassins in front of the goal, the 36 year old has found the net a record 16 times and generations might pass before someone breaks his record. A World Cup winner's medal has come as a fitting climax to the modest Klose's international career which probably ends in Maracana. A miraculous career is coming to a miraculous end for Klose .

Nobody would have ever expected the host nation to fail in such hopeless fashion. Nobody would have ever believed that an injury to a single player could result in his team getting steamrolled. In the quarter-final match against Colombia, while challenging for the ball, Neymar was kneed in the back by Juan Camilo Zúñiga and had to be removed from the pitch on a stretcher, with a hospital scan revealing that Neymar had fractured a vertebra in his spine, and thus ruled out from the rest of the matches. Brazil failed shockingly during their semi-final match against the eventual winners - Germany. A 2-0 or maybe a 3-1 must have been humiliating enough for the hosts but a final score of 7-1 was just outrageous. Coming to the tournament after winning the Confederations Cup, many would have expected the Brazilians to lift the Cup for the 6th time but that wasn’t destined to happen.

After impressive performances in the group stages, the whole country was gearing up for the huge celebrations that they expected to take place in the streets of Rio, and then they faced Germany, which pounced on Brazil’s frailties as professionally and mercilessly as they could. The Brazilian players as well as manager, Luiz Felipe Scolari, have talked about a “blackout” to explain how Germany could put five goals past the Seleção in 18 minutes but that is just a disgusting excuse. More salt was rubbed in their wounds when the Dutch too thrashed them but the degree of thrashing was a little more polite. An injury to their star striker, Neymar was the last thing the Brazilians ever wanted but it was as though fate had decided to act against the most successful country in football World Cup, this time. Even if the Brazilians had shrugged off their exit in the World Cup held in South Africa four years ago, this exit will not be that easy to forget.
Another champion team to exit from the tourney was the defending champions. Spain which had very effectively used tiki-taka football to a very positive extent in the past, has found themselves knocked out of the World Cup with back-to-back losses against Netherlands and Chile. Spain who has an enormous pool of talent have only themselves to blame after they bid farewell to the World Cup in such a quick fashion.
Both teams started their tournament as red-hot favourites but couldn’t capitalise on it and exited in different stages but in an equally hopeless manner. If Brazil reached the semi-finals to be thrashed by Germany, Spain couldn’t even get past the group stages.
However, the ugliest scar in the World Cup was and will remain the antics of the saber-toothed Suarez. Luis Suarez who came into the tournament after recovering from an injury played a major hand in his side's victory against England scoring both the goals in his side's win. But late in his very next match, Suarez ‘bit’ an Italian player stirring up the footballing world. Not for the first time in his controversy clouded career, Suarez was found allegedly biting his opponent player and was handed a 4 month ban by FIFA. The highly-talented Suarez who has developed a habit for biting the opposing players received a flood of criticism from the footballing world, many demanding that a player of this absurdity is not fit to play professional football.

While FIFA acted rigidly in Suarez’s case, its tepid response to Juan Camilo Zúñiga’s kneeing of Neymar that resulted in a broken vertebrae, was criticised.

Although this tournament has been marred by such ugly controversies and huge disappointments, FIFA 14 has had its share of positives and  will be the tournament a football fan can never forget.
Posted by Seasonal Magazine at 11:30:00 AM