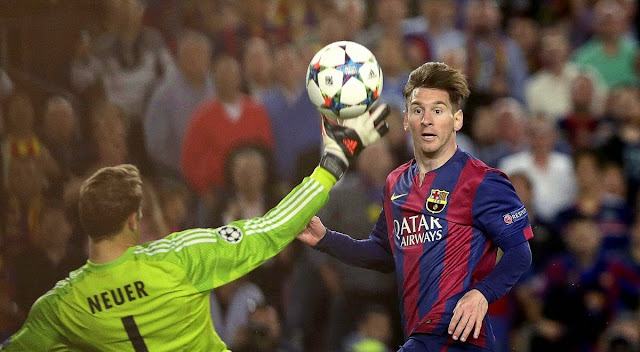 When former Barcelona coach , Pep Guardiola remarked that his former prodigy , Lionel Messi was unstoppable ahead of the highly anticipated semi-final clash between Barcelona and Bayern munich ,little did he know that his statement was spot on. Two moments of Messi magic along with a goal from Neymar steered the Catalans to the comfortable 3-0 victory over the German champions.

The Argentine drilled home after 77 minutes and doubled the lead three minutes later with an astounding chip after beating defender Jerome Boateng with his nimble footwork. Later , Neymar slotted home a cool finish as the 4-time European champions edged closer to the finals.

It was a disappointing evening for Guardiola on his return to his former club. Bayern Munich who thrashed Barcelona 7-0 by aggregate in 2013 was left licking their wounds after their defence was no match for the terrific trio of Messi , Neymar and Luis Suarez .And Bayern who were neck to neck with Barca even after half-time failed to outshine them.

This being said, credit should also be given to Bayern who played impressively but was just a notch below the winners. Xabi Alonso was particularly imprssive in the second half and although keeper Manuel Neur was beaten three times he was quite impressive by keeping out Suarez and Dani Alves. Bayern midfielder Bastian Schienstieger and captain Philip Lahm was at their best too as they kept the talented Barcelona midfield of Andres Iniesta and Sergio Busquets at bay.

Another interesting fact is that Bayern Munich had more possession than Barcelona , only the second team to do so in 442 games but they did not even have a single shot on target. Their best chance came in the opening minutes of the game when a sliding Robert Lewondowski failed to connect a near perfect cross by Thomas Mueller.

The match started with both teams pressing for the ball, high in the pitch as they identified a common objective of winning the ball back as quickly as possible. Dani Alves , supposedly a full back made more tackles in Bayerns penalty box than he did in his own whereas Xabi Alonso who was played in the holding midfielder position pressurised the Barcelona keeper on a frequent basis. The loss leaves Bayern Munich trailing 0-3 when they host Barcelona in the second leg at the Allianz Arena.

In the other semi-final match, Defending champions Real Madrid was outclassed by Italian champions , Juventus. After overcoming their constant nemesis , Athletico Madrid in the quarter finals the nine time European champions failed to break down the well organised Italians who were sturdy and composed in their defence as well as lethal and effective in their attack.

Former Real Madrid forward Alvaro Morata came back to haunt his old club as he sent Juventus on its way to a 2-1 victory over the holders in the first leg of their Champions League semifinal on Tuesday. Morata, who moved to Juventus in the offseason shortly after helping Madrid to a record 10th Champions League title, didn't celebrate after scoring the opening goal in the ninth minute.

Experienced striker Carlos Tevez too was instrumental in his side’s victory as he continuously caused problems in the gap left by defender-turned-midfielder Sergio Ramos before calmly slotting home a penalty. The defender who was deployed in an unfamiliar role in the midfield was nullified by the evergreen Andreas Pirlo and the excellent Artuto Vidal.

The only positive that came out of Sergio Ramos’s more advanced role was that it freed playmaker Toni Kroos on several occasions ,but the German wasn’t at his best to make it count. With Luka Modric not expected to be back on time, it will be interesting to see whether Coach Carlos Ancelotti twists or persists with Ramos in midfield on the back of his trials and tribulations in Turin .

However, Ancelotti will be pleased that World Player of the Year Cristiano Ronaldo is in marauding form as he netted an away goal which will be crucial if his side should progress to the next round.

Striker Bezema is expected to make a comeback as Madrid will be expected to field their famous BBC (Bale Benzema Cristiano) attacking line-up. World record signing , Gareth Bale was like a fish out the water as he struggled hard but failed to make an impact on the match that was wrestled out of their control. The Welsh who scored in the CL finals last season has been below his best in the recent weeks and a power-packed performance from him is highly due.

The second leg promises to be even more exciting as Bayern face a near impossible task in overcoming the three goal deficit while Real Madrid who has never qualified after losing the first leg, will have to do something they have never done before in their glittering history if they are to reach this year’s Champions league final.
Posted by Seasonal Magazine at 7:16:00 PM