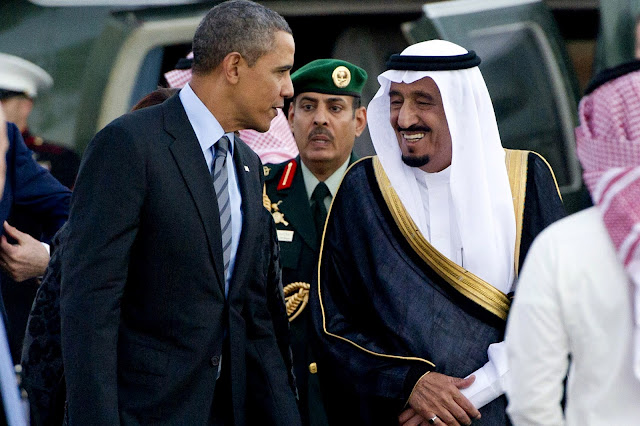 
As Yemen plunges into an inevitable situation of nation-wide famine and water shortage, analysts fear that inadequate concern among countries (outside the Saudi-led coalition) could propel a joint US-Saudi economic takeover, especially with no end at sight to the political crisis. The situation is akin to the US invasion of Iraq, which saw the military superpower initiate a pro-West regime change and wrested control of Iraq’s oil reserves.

America throwing its weight behind Saudi Arabia is not a recent development. However, relations haven’t been rosy between these two “friends-with-benefits” since the time US and other Western powers brokered a nuclear pact with Saudi’s perpetual enemy Iran. But what draws skepticism is USA’s support for a country alleged to be funding ISIS operations in Syria, especially in light of the jihad waged by the Sunni terror outfit against America and the West. ISIS can trace its initial funding and arms procurement from Saudi Arabia and USA, hoping to topple the Assad-led Syrian government in which the Al Qaeda offshoot continues to play an active role although now in isolation from the other opposition forces.

In reality, USA has refrained from direct military intervention (a prickly issue in U.S special operation circles especially after the 1993 Mogadishu incident) even though Yemen continues to be a haven for the AQAP leadership. But ISIS has made steady gains in the conflict and their recent bomb attack in Kuwait only proves their imminent threat in the region. Meanwhile, USA is clearly in a fix: whether to undertake on-field operation or strongly confront Saudi’s alleged role in ISIS funding. We all know there is no love for the Yemeni people, perhaps economic and geo-political motives under the garb of preventing the rise of AQAP would ultimately decide America’s latest role in the Gulf region.

In the ongoing conflict between the Houthi rebels and Saudi Arabia in Yemen, the USA has sufficient reasons to support the latter’s air-strikes in a bid to allay fears of a Shiite-Sunni proxy war that has already worsened the crisis in the Middle East. The desire of the Obama-led administration is to prevent Yemen from falling apart like Iraq did due to the escalating sectarian violence. One of the primary concerns of the USA is the repeated Saudi claims of Iranian support for the Houthi rebels. Iran’s alleged role in the war in Yemen comes at the backdrop of its nuclear program being monitored by IAEA after intense pressure from Western countries, including the USA, forcing it to conform to the regulations of the inter-governmental agency. The USA continues to have a bitter rivalry with the orthodox Shiite power and is thus forthcoming in its support for any operation intended to stem Iranian influence. The U.S. is expanding its role in Saudi Arabia’s campaign in Yemen, vetting military targets and searching vessels for Yemen-bound Iranian arms amid growing concerns about the goals of the Saudi-led mission, according to U.S. and Arab officials.

By preventing a direct intervention by Iran, the U.S hopes to secure the Gulf region in the hands of their principal ally, Saudi Arabia. However, they are now increasingly wary of the shifting war aims of Saudi leaders, who want to bomb the rebels back to their base in the country’s north. Such an extended campaign could take a year or longer, according to U.S. intelligence assessments. Another stakeholder in the region is the powerful Al-Qaeda (AQAP) which is perhaps the most notorious of all Al-Qaeda outfits. Even after the killing of Al-Qaeda leader Nasir al-Wuhayshi, reportedly via U.S drone strike, the AQAP has proved itself capable of recovering swiftly from significant leadership losses. Wuhayshi headed al Qaeda’s most active affiliate, the Yemen-based al Qaeda in the Arabian Peninsula (AQAP), and was the designated successor of al Qaeda leader Ayman al-Zawahiri. The group made fitful progress, at times taking territory but often losing it quickly after alienating locals and proving vulnerable to government counterattacks. But when the government of Yemeni President Ali Abdullah Saleh fell in 2012 during the Arab Spring, AQAP tried to step into the void. Saleh’s successor, Abed Rabbo Mansour Hadi, pursued AQAP vigorously, but his weak government was unable to score any lasting successes. The AQAP efforts to attack the United States and the West, in general, led to a greater U.S. focus on Yemen and more drone attacks there. In 2011, the United States killed Anwar al-Awlaki, a U.S. citizen and AQAP member who helped lead the terrorist group’s campaign against targets in the United States and Europe. U.S. officials want to find a quick diplomatic exit to the fighting—one that enables the U.S. to restore its counterinsurgency operations in the country and resume drone strikes against Yemen-based al Qaeda in the Arabian Peninsula. Those operations were curtailed by the fighting last month.

During the initial round of Saudi strikes, the U.S. limited intelligence sharing with the Saudis, as it reviewed its role. The U.S. provided some satellite imagery, but stopped short of picking targets for them. In recent days, the U.S. has increased intelligence-sharing with the Saudis, providing them with direct targeting support for sites the kingdom wants to bomb, according to U.S. officials. U.S. officials say the review system allows them to warn the Saudis away from potential targets if there is a high potential for collateral damage or if a strike could inadvertently destroy critical infrastructure. The Obama administration is skeptical the airstrikes will reverse the Houthi gains. Worried by the risk of more direct intervention by Iran, U.S. officials say they are urging the Saudis to set their sights more narrowly on halting rebel advances and reaching what amounts to a battlefield stalemate that leads all sides to the negotiating table. U.S. officials worry mounting civilian casualties will undermine popular support in Yemen and in other Sunni Arab countries backing the campaign. At least 648 civilians have been killed since the intervention began, and Saudi-led strikes have hit hospitals, schools, a refugee camp and neighborhoods, according to U.N. officials.

Apart from the worries, the campaign has made one of the world’s poorest countries the center of a regional proxy fight with high stakes for the Obama administration. The April 2 framework agreement that the U.S. and other world powers reached with Shiite Iran to trade sanctions relief for limits on its nuclear program has prompted the Saudis and their Sunni Muslim allies to resist what they see as Iran’s efforts to impose its influence in the Middle East—often along sectarian battle lines. Iran openly supports the Assad regime in Syria, which is battling against a coalition force, funded and supported mainly by the U.S and Saudi Arabia, eyeing its overthrow.

Thus, U.S support for the Saudi-led air strikes can be seen in the context of the need to maintain the balance of power in the region with its Sunni allies like Saudi Arabia and Qatar being at the helm of decision-making affairs. The Syrian government, Iran and Lebanese terror-outfit Hezbollah have resisted the efforts of opposition forces to overthrow the Assad regime and thus the U.S understands that this failure in the Middle East can’t be replicated in Yemen prompting support for the military airstrikes.. So, the U.S also has its own security interests to keep in mind while searching for a political solution to the Yemeni crisis.