5 Reasons why Dhoni may Pooh-pooh Sreesanth 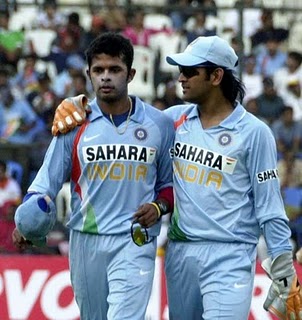 
Most cricket enthusiasts and pundits find Sreesanth a hot topic to debate on. Isn’t it better to leave the poor guy alone and find a Sachin or a Yuvraj to argue upon? Ah! the obvious retort would be a crisp 'NO'. And that is where this Malayali speedster has made a name for himself. He has performed magic and even antics that even the best would fear to replicate. He is the media’s dream guy so much so that news channels dedicate umpteen hours of their time on breeding him into a controversial figure. The funny part is that Sree isn’t least bothered about what people speak about him, but is more concerned on what people should speak about him. There lies a deep belief among many that Sree can be India’s history maker but in order to be a part of history, you must involve in the present. But for all those who think that Sreesanth is history maker, there are others who think that Sree is already history. Here are 5 reasons why Dhoni may still pooh-pooh Sreesanth:
1) He isn’t a Zaheer!

Sreesanth is Sreesanth and that very fact may lead to his ouster. His wicket-taking abilities have now become a big question mark. But derailing his career is not the solution. If picked, everyone will be pinning on him to do a Zaheer. But he lacks the patience and class of the latter and that may go just against him.

2) His actions speak even louder than words!

Perhaps the only one who can control and motivate Sree is himself. But realization of your mistakes is prime before any rectification. This is one thing Sree finds hard to think upon. His mad-man stature and wayward behaviour may cause Dhoni to think twice before his insertion. Controlling emotion doesn’t seem to be part of Sree’s personal memorandum. If only his bowling did the talking would Dhoni ,without hesitation, draft him in.

He isn’t touted as a hero like his fancied team-mates and that may turn the tables on him. From past incidents, one thing is for sure: Sree isn’t the most popular one in the Indian dressing room. To sledge Sachin who has achieved everything surely isn’t child’s play and he may be among the very few bowlers in the world to do such a blatant thing. Reports say that he celebrated wildly after getting rid of Dhoni in an IPL game, leading many to wonder whether he had actually dismissed a Pakistani. Such was his jubilation! But no one would dare take him on. That is the power of Sree!

4) With Sree there, impossible is nothing!

What do you get if you place two controversial starlets just inches way from each other? IPL Slapgate! The atmosphere for the semi-final war between India and Pakistan is already electrifying and a probable Sreesanth selection would mean adding more  oil to fire . Dhoni, presumably, is sick and tired of Sree’s onfield drama that he would go by his conscience of not playing him. And the skipper, solely, is the reason for Sree’s miserable situation. Dhoni must realize that the more you are aware of the past, the better prepared you are for the future and Sree has numerous examples to gasconade about his utility for the team.

Sree is being analysed only the basis of his dismal rigmarole in the opening game of the World Cup where he leaked 53 runs in the 5 overs he was accorded to. In that case then no Indian bowler deserve to be a part of the team selection. Dhoni has missed a trick by not playing Sree, who even though is capricious, can sneak in a wicket or two. Five overs isn’t an apt basis on which a bowler is passed into the black list . Dhoni will rue his mistake of not playing him thereafter, if Sree comes up with a sparkling performance against Pakistan. But one numeral will haunt him for the rest of his life and the same is the  reason why Dhoni will look beyond him - the dreaded 5-53!
Posted by Seasonal Magazine at 1:41:00 PM