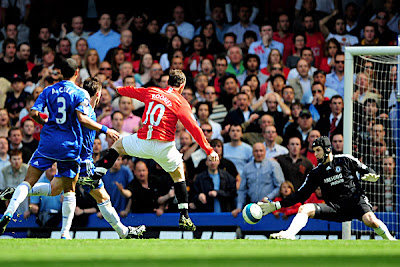 
The stage is set for the most mouth-watering showdown ever in English football, Manchester United vs. Chelsea. It is a do or die match for Chelsea as they trail 1-0 from their Champions League first-leg quarter-final. When the Blues travel to old Trafford to lock horns with the Red Devils they will not relish the statistic that only two sides have ever recovered from a first leg home loss to progress to the later stages in the history of UEFA Champions League.

The new boy Fernando Torres will be keen to open his account for the Blues. The former Liverpool striker has never found the back of the net while wearing a Chelsea uniform and has many a time surrendered in the hands of Manchester United captain, Nemanja Vidic. The arrival of Torres has in fact disrupted Chelsea’s famed striking sequence of Didier Drogba and Nicolas Anelka. The 50 million star striker has not been in top touch in the current season but he will be keen to shut the door on his critics. And there is no better time and stage to do so than in this Champions League quarter-final showdown against United at Old Trafford.

On the other hand, Manchester United sitting firm in the peak of Barclays Premier League with 7 points clear of 2nd ranked Arsenal has been in excellent form this season. Both, Dimitar Berbatov and counter part Wayne Rooney has been scoring goals at every possible opportunity. Also, the new recruit Javier Hernandez or ‘Chicharito’ (little pea) has played beyond expectations. The presence of these key Manchester United players in the field is bound to strike fear in the heart of the Chelsea defence.

The only weak link that can be spotted in the Manchester United line-up is their veteran goalkeeper, Van der sar who was seen to be creaky in the previous match. The John Terry vs. Wayne Rooney battle will definitely be the most anticipated battle between these players. With both players blessed with such great pace, we could well witness a stalemate in this particular battle.

Now, Chelsea will be thinking – what could we possibly do to create terror at Trafford? How can we divide United? Well, if Chelsea wants to make it through to the semis they really have to shunt out golden boy, Torres, and bring out the cut-throat attacking duo of Drogba and Anelka.

They have a mighty - maybe an impossible task - in front of them that is, defeating Manchester United at home, but Chelsea can spring back an unpredictable attack on United. Sir Alex Ferguson must be aware of this fact as he sends his team to achieve glory.

However, Manchester United player, Rio Ferdinand insists the chance of becoming a Manchester United treble hero is not a motivation ahead of the Champions League showdown with Chelsea. Absolutely. This has turned out be the only even fixture in the QFs. The other matches have been too one sided. Arguably among best teams in the football world, Manchester United vs. Chelsea match is promised to showcase top-class football.
Posted by Seasonal Magazine at 7:17:00 PM