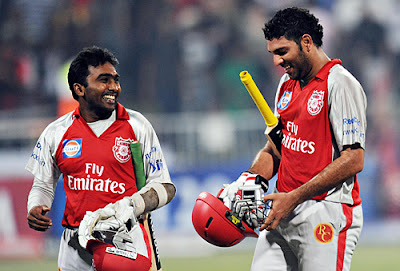 
What do you get when two newborn babies, struggle for space in a cradle, and cries for all the attention they want? A perplexed mother? To say the least, mother IPL will witness two of her ‘navi’ siblings fight it out for her attention in a match that will decide which of the teams will capture the hearts of ardent cricket fans across the IPL fraternity. Sahara Pune Warriors (SPW) in their first match had pulverized a hapless Punjabi outfit and made mincemeat out of them. Of course, SPW were slated to overpower a dull-looking Kings XI Punjab, while Kochi Tuskers had a difficult outing against a full-fledged RCB team.

SPW might have beaten the team from the north but their real campaign kick-starts when they go out head-on-head against the team from the south, the Kochi Tuskers Kerala (KTK). Pune heads into the match as sure-shots but they will be wary of a team that made batting look simple against an excellent bowling attack. Basically, SPW has a young team captained by a freak who has turned into a man-of-senses, the indomitable Yuvraj Singh. Outclassing victories reveal a team’s hunger for success but in this match SPW will have to sweat it out to finish with 2 points.

They have a terrific opening pair in Graeme Smith, who was nevertheless dismissed without scoring in the last game, and Jesse Ryder who showed his bill’s worth by smashing the Punjab bowlers all round the park. The temperamental Ryder’s skill with the ball will prompt Yuvraj to utilize this rising star of New Zealand cricket. They have a seasoned campaigner in Robin Uthappa who can strike deadly blows when the situation demands, and his glove-work has improved immensely, which means Pune need not search for a specialized wicket-keeper.

Man-of-the-Tournament in the World Cup, Yuvraj Singh will hope to continue his rich form with the blade, and the dynamic prince of Indian cricket, surprisingly, did not roll his arms over  the other night. Mithun Manhas is a mainstay in the Delhi Ranji team and his expertise will do a world of good for a team that has hard-hitting but risky players and with Manhas’s ability to play the long handle, Pune can put up a fighting total on board.

Alfonso Thomas, a county cricketer from the English scenery, battled like a true warrior with his accurate and menacing bowling getting rid of the dangerous Adam Gilchrist. Wagh, the local talent who plays for Vidharba in domestic competitive cricket, was the pick of the bowlers with his raw left-arm fast deliveries. Murali Kartik wasn’t in the thick of the action but the former KKR bowler will lead the spin department. Their batting will be a tough nut to crack as all have proved their worthiness in this format.

But opportunity comes only once in a life-time. If KTK had heard Eminem’s record-breaking album song “lose yourself”, they wouldn’t have squandered a potential win after they got off to a blazing start with the bat.

Kochi will want to win back the support of their fans after sources revealed that the team has no problems playing in an empty stadium, causing furore among fans. Nobody expected their batsmen to put up a fabulous show and once again Brendan McCullum will be the key man for the Tuskers. His clean power-hitting made RCB attack look helpless and along with VVS Laxman, Kochi will hope for a flying start from the pair.

Jayawardena is a great leader and a classy cricketer. His deft touches and silky flicks are a treat to watch. Brad Hodge has also proved to be a brilliant cricketer in this form of cricket after smashing 20-odd runs in quick time. Capped to that he is a fabulous fielder. Parthiv Patel and Ravindra Jadeja can strike late blows to propel the scoring rate. However, whether Kerala Ranji Captain, Raiphy Vincent Gomez, will be selected remains to be seen. Kochi’s bowling attack will have to be more specific and they should bowl according to a plan, so that we have the chance to witness a cracker of a match.
Posted by Seasonal Magazine at 4:08:00 PM