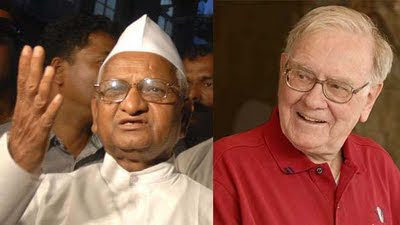 When Jantar Mantar turned into a carnival site, most market participants would have wished it weren’t a Saturday. The anti-corruption win by Anna Hazare would have been enough to rally the Sensex by 500 points - if the markets were open - that is used to rally even when Dhoni and team manages a win.

But on 11th April 2011, nothing of that sort happened. By noon itself, Sensex was trading a good 150 points down. The market which had jumped 1000 points when Dr. Manmohan Singh came to power without the help of Prakash Karat, decided to ignore the Hazare win against the Government. But it might rally if and when Dr. Singh steps down and another pro-development Government, most probably led by BJP-NDA, assumes power.

But whether markets rally or not, what Anna Hazare proved was beyond dispute. It was the power of reputation, the power of uncluttered thinking. When a blemish-less past joins hands with an enviable track-record in social achievements, that is personal reputation. But more impressive was the uncluttered thinking - that corruption is the worst menace facing the country, and not Pakistan or China, and that the time to act is now. The loud and clear message was that dilly-dallying any further on the issue of Jan Lokpal Bill (Citizen's Ombudsman Bill) won’t be permitted. India wouldn’t have agreed more.

What Anna Hazare taught was the power of a single man, and an old man at that. The lesson is simple - if you are fighting for a just and noble cause, and if your reputation is intact, the power of masses is behind you.

Now after the momentous impact of the RTI Act, the Jan Lokpal Bill is sure to make life harder for the corrupt in politics, bureaucracy, and judiciary, if not eliminate corruption once and for all.

The financial markets too need a similar clean-up. Pressure is already mounting on authorities to extend the RTI Act to listed companies.

But here also, what a mighty Government and the combined might of all FIIs and DIIs couldn’t do, a person achieved during the past fortnight.

Everything about India and its markets were negative. Scams, inflation, rising interest rate, rising crude, and even anticipated things like a poor Q4. FIIs who started dumping since November, accelerated their pace one month back, and this time, DIIs were in no mood to catch the falling knifes.

Brokerages one after the other came out with drastic reports. You know the types - ‘If Nifty breaks 5200, it will touch 4800’ or ‘Nifty will touch 5000 before 6000’. Even big overseas names like Credit Suisse, or respected Indian names like Motilal Oswal had joined suit. The brokerages even invented a term for this - ‘the bear market inside a bull market’.

Then this man came along. An old man at that. He didn’t invest a paisa during his visit. But he said a simple thing, almost casually - Indian markets look good. And that it will look good for a long long time.

Then all the hell broke loose. Starting on 22nd March, and extending to 9 straight days, FIIs were net buyers daily, in amounts zooming quickly from Rs. 300 crore to Rs. 4000 crore. On April 4th, foreign institutional investors were net buyers for Rs. 4087 crore. And that too in a week notorious for redemption pressure from MFs.

Call it the Buffett effect if you like. But how did his simple words change these FIIs and brokerages like chameleons? Nothing had changed on the ground. In fact, it has turned worse. Inflation has again resumed its upward journey, crude is finding new peaks, newspapers and channels are more into the nitty-gritty of scams than ever, RBI might take interest rates even higher, and Q4 results are nearer. Still, the Buffett effect was overpowering.

That is the power of reputation, and, of course, uncluttered thinking for which the third richest man in this globe is famous for. Buffett’s logic was simple enough.

It doesn’t really take a Buffett to see the opportunity. But the sad point is that it still takes a Buffett.

Is it that the FIIs and brokerages don’t have a clue regarding how to do their own business? Yes, it is partly true. Their capabilities are complex, but their thinking is cluttered. Watching the drama closely over the fortnight, it was clear that only one overseas brokerage could get the bull call accurately.

But more than that the problem lies with the eagerness to make quick and massive money, wherever the market goes, and whatever happens to their clients including retail investors.

Almost all the smart money players including institutional investors, brokerages with proprietary trading, and even HNIs have mastered the art of making money both ways. When the market goes up they make money on spot and when the market goes down they short the futures and make even more money.

That is where investors like Buffet stands a class apart. His Berkshire Hathaway (NYSE:BRK.B) takes so much pain in choosing stocks, that any American investor can blindly follow his buys if they are listed, or even more easily buy Berkshire stock. It might not do an Apple (NASDAQ:AAPL) in the short-term, but it will outdo Apple in the long-term.

It was interesting to note how the FIIs and DIIs were confused to act on the Buffett signal. The smartest ones started refraining from net selling first. Then they went in for net buys in a small way. All the time watching which way the market would ultimately swing. Then the momentum gathered pace, with the less smart FIIs also joining in, taking daily net buys to 500, 1000, 1500, 2000, and up to 4000 crores!

The message is clear and loud - the smart money players wanted to make money at every twist and turn, every day if possible. But it is up to our authorities whether India should allow this senselessness. Allowing the strategy of short selling - selling something before buying - is not that a great strategy for either the country or its retail investors. Of course, market participants would pooh-pooh this idea, citing short selling as a price discovery tool and all. But all that is plain rubbish invented by brokerages for brokerages.

In fact, many European markets like Germany have emerged stronger from crises by banning naked short selling, even if for short durations. Plain commonsense shows that truer price discovery is possible when sellers are selling only what they have bought first.

Buffett went back almost empty handed. Though he did have truckloads of money with him, and anticipated a few Indian business houses to call him to invest, nothing of that sort happened. It shows that what Buffett told is so right. The big and best business houses of India realize that they are indeed sitting on huge potential, even if that means Buffett doesn’t get a pie from them.

On the meeting with Dr. Singh, Buffett was as clear as he was about the market. The Prime Minister is “wise and kind”, were the exact words. But India has started wishing that the words were “smart and aggressive”, words he would easily use to describe his Indian born deputy Ajit Jain, who is seen by many Berkshire watchers as Buffett’s successor.

Buffet has gone. Markets will fall again. Then it will rise again. But apart from being shocked each time the trend bends against one’s wishes, there is much to learn from this simple old man.

Buffett is no saint. He had given a chance to Goldman Sachs (NYSE:GS) against the wishes of American public. He has hedged his positions using derivatives. Now, he is under heat due to the insider-trading allegations against his former top lieutenant, David Sokol.

But despite being one of the largest investors in this globe, even the smallest of retail investors can learn much from this pragmatic man. Even his best known quotes are still relevant.

For example his advice to new recruits at Berkshire: “Rule No. 1 - Never Lose Money. Rule No. 2 - Never Forget Rule No. 1.” Beyond the joke what does it mean? It means that the first thing to know about capital markets is that there is no capital protection, and that to insure against capital loss, you have to invest in the strongest frontline stocks. In the current scenario, it means selecting those stocks that have corrected the least post-November, in each sector. But the average investor thinks it is a foolish strategy. He looks for the most corrected stocks, and ends up losing capital at the next downturn. Rules 1 & 2 also mean that you should always place your stop-losses.

The third rule is also quite relevant today - buy a stock believing that you are spending forever one out of 20 stock-buying chances in a lifetime. In other words, be quite choosy with your money earmarked for equities. If you consider capital protection with growth prospects too, this rule also rings true in today’s market. There are not a lot more than twenty stocks worth your money at the current prices.
Posted by Seasonal Magazine at 2:39:00 PM