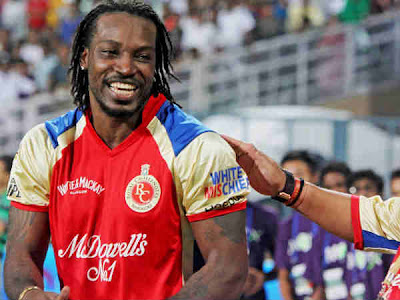 
Christopher Gayle is the Caribbean delight to numerous fans back home. He eats drinks and talks the West Indian style. His nonchalant approach that disguises the enormous pressure with which he walks into bat,  his pleasing personality, and his unwavering mood  have made Chris Gayle a heartthrob for a section of cricket lovers barring those who bowl to him, of course. But even the best of bowlers have confessed about their liking towards the big guy even when they are at the receiving end of his blitzkrieg.

Kolkata Knight Riders may not rue their shocking decision of over-looking this mighty batsman during the auctions, as KKR are perched in a comfortable position in the points table but RCB roped him into their mix from wilderness after he went unsold during the same auction.

The impact that Gayle made thereafter was simply phenomenal. He was seen joyful after he was handed a contract by RCB, but the West-Indian still had that sorrow inside him on being ignored by the other franchisees. And that sorrow broke loose and throughout the tournament when Gayle hammered the hapless bowlers to all parts of the ground thereby revealing his skill and ability in this format.

He even went on to score two tons in the 4th edition of the IPL  and emerged the leading run-scorer in the tourney. The Gayle chapter doesn’t end with that. He is currently the leading run-getter in the ongoing IPL after his blistering knock of 82 that sent the Mumbai Indians camp running helter-skelter. He has already smoked 36 sixes in the tournament  and with the kind of form he is in none will be surprised if he goes on to score another century in due time.

The change noticeable in Gayle is that he has learned to value his wicket and has ensured that he bats through the whole innings. From being seen as  a hit-and-miss willow wielder to being a responsible batsman he surely has caught the eyes of the West Indies Cricket Board, with whom Gayle has finally patched up after a series of tussles. The outcome is that he has been drafted into the national team fray which many experts believe will scale the prolific player to greater heights.

The Gayle-storm has been the cliché associated with this big-hitter and he certainly lived up to this tag as he has shaken and stirred almost every bowling attack in the IPL. The clarity and calmness glorified in him makes him adorable and well respected by all.

Together with Dilshan, Gayle has forged a lethal opening combination that might just have solved the RCB’s woes aplenty. His mere presence at the crease triggers a shivering state of mind on the bowler, and like all flamboyant batting architects, once he gets his eye in, then there’s no calming the storm. He is in ominous touch of late which gives RCB a real chance of making to the play-offs as he can single-handedly guide his team to victories.

Another striking feature of this man is that he is a genuine crowd-puller. One can be assured of a DLF Maximum from his blade as going by stats he has smashed the most number of sixes in the history of IPL. One of his booming strikes into the crowd plummeted onto a young girl who was later hospitalized. And the Caribbean bloke spared hours from his schedule and paid a visit to the hospital where the girl was admitted and even presented to her the medal he had won for hitting the most sixes that night.

This act truly personifies Christopher Gayle. He is truly the brand ambassador of the IPL. In candid chats with journalists, he has expressed his desire to hit the Bollywood screen and hopes to emulate Salman Khan in the process. So don’t be surprised if Gayle romances a Hindi actress on screen with a few item songs to his credit too. He is sure to take even the film industry by storm.