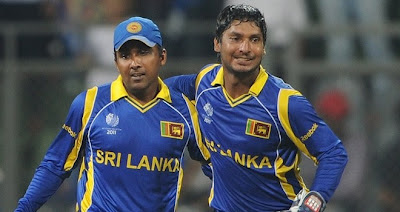 
Mahela Jayawardena, the skipper of the Sri Lankan Cricket team for the ICC T20 World Cup, has incited a captaincy-swap with former skipper, Kumar Sangakkara, which may soon coalesce the law-makers of the international cricketing body to initiate a new norm into the constitution of the game.

Now, why has the Sri Lankan think-tank played such a clever and shrewd move? Jayawardena has a history of operating his field positions in a snail paced manner as a result of which he has been penalized with a slow over rate fine and match ban for exceeding the stipulated time limit of the fielding innings, within which his team is bound to bowl out their quota of overs. Thus, Sri-Lanka conveniently passes on the captaincy reins on an interim basis to Kumar Sangakkara.

Their main concern sprouting from this ploy is to preserve their talismanic skipper for the high adrenaline pumping games - the semi-final and if they are to advance further, the finals. In their second group match against the West Indies, Jayawardena and Co were found to be one over short of its target at the end of the match when time allowances were taken into consideration. The warning was issued by Javagal Srinath, Emirates Elite Panel of Match Referees. In accordance with ICC Code of Conduct governing minor over-rate offences, players are fined 10 per cent of their match fees for every over their side fails to bowl in the allotted time, with the captain fined double that amount.

In their following game against England, Kumar Sangakkara walked in during the toss-up which instantly raised eye-brows, with many speculating that Jayawardena might have sustained an injury. Sangakkara led admirably to knock the defending champions out of the WC, abiding by the over-rate specifications. At the conclusion of the game, Mahela Jayawardena termed the skipper-switch as a “tactical move”.

Sri Lanka played well within the ICC Code of Conduct by swapping captaincy role as there is no rule preventing the same. The team exploited the loop holes in the rules system which has brought to light the inadequacy and fickleness of the norms, which is subject to change soon after its manipulation only. The ICC has realized that there is an urgent need to advocate stringent rules which don’t permit teams to swap the captaincy role with a non-captain, playing member of the team during the progress of a tournament. Once again, rules are being altered according to situation, not as a necessity for change. However, such incidents come as eye-openers or wake-up calls for the law formulating body, which has time and again, bowed down to external pressures from member-bodies, like the BCCI.

There are two ways in which the propagation of a new rule comes to birth: One, when incidents like the captaincy swap, don’t have a written law against its usage, and secondly, selective thrusts put forward by the cash-rich and influential sub-bodies which appeal for tailor-made rules to suit their liking, example BCCI’s constant disapproval of the Review System and Hot Spot technology. The ICC has fallen prey to both these pressures even though the former is unpredictable in occurrence while the latter portrays the supremacy and dominance of the BCCI over its big daddy.

Naturally, there’s no bigger form of awkwardness than to alter rules of the game, when clever violations prompt such a move.

From the team’s viewpoint, “playing within rules, not beyond it” is the inhibiting factor. Nevertheless, the mindset of the Sri Lankans can be easily assessed based on their surprising tactic. In a wider implication, it means that the skipper role is for sheer namesake and not a position of stronghold and permanency. Now if the Sangakkara-led team is caught red-handed for slow over rate in the semi-finals against Pakistan, they will proceed to the finals (through a victory) fielding a new skipper, maybe Angelo Mathews or Tillakaratne Dilshan.

Thus, the dignity of the role is undermined; as such a move conveys that anyone can be made the captain irrespective of his experience in it. The idea behind this is that even with Jayawardena not assigned captaincy role, he can still make the decisions regarding the field setting and run-chase strategies Dhoni was banned for the 4th test in Australia as he faced a similar situation wherein Sehwag was made the captain. If only India had thought of this loop-hole then, would they have juggled with the skipper-role. However, it wouldn’t have made a drastic difference during that ill-fated tour Down Under where the Indians were routed 4-0.
Posted by Seasonal Magazine at 4:11:00 PM