IPL Spot Fixing: Small Fish is Tasty, But Who Will Chew the Big Fish? 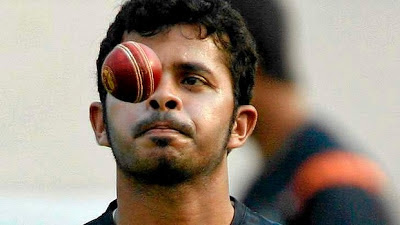 
Another IPL spot-fixing shocker has crept in. This time around a well-known face in the cricketing circle has landed in a spot of bother. Indian test discard and a member of the World Cup winning Indian squad,  Shantakumaran Sreesanth and two of his Rajasthan Royals team-mates have been arrested by a special cell of the Delhi Police on grounds of illegal manipulation of match proceedings, after a tip-off revealed the significant cash deals negotiated between the players and the bookies. While Ankit Chavan and Ajit Chandila were nabbed from their hotel rooms at the Trident, Mumbai , Sreesanth was arrested from his friend’s residence in the wee hours of Wednesday night after Rajasthan Royals crashed to a defeat against the Mumbai Indians at the Wankhede Stadium.

The bookies have allegedly been linked to underworld syndicates indulging in money laundering, with sources claiming their operation base to be Dubai. The betting scandal broke out a couple of hours after Rajasthan were handed a killer blow in their away encounter against Mumbai Indians, with Ankit Chavan orchestrating his histrionics in one of the betted overs, wherein he leaked 13 runs after having bowled an economical first over.

The entire spot-fixing saga has certainly hurt the spirited sentiments of many a cricket fan, who are furious of the fact that a mini-drama is being staged by a handful of greedy cricketers. The police got into swift investigation after a 13-year old was kidnapped and murdered earlier this week in Mumbai allegedly over a ransom with which the culprit was hoping to clear-off his IPL betting loss.

Former cricketers have lambasted the shameless trio for having ruined their respective careers and on having cheated billions who so enthusiastically followed their ‘rightful’ approach to the game with an unquestionable passion. While the news surfaced that three cricketers had been taken into police custody over their unethical actions, effigies were burnt and placards and slogans were raised against the perpetrators.

But what made the trio indulge in such an act of corruption? Is it mere greed? Or is it the sheer lack of transparency and regulation associated with the IPL? Both, in fact. They are two sides of the same coin.

Recently, Preita Zinta was fuming with anger and displeasure at the treacherous act of these cricketers who according to her earn “sufficient money” out of their playing contracts, this excluding their advertising and commercial commitments. She attributes their greediness to a lack of moral values and refinement.  A huge amount of monetary and emotional investment goes into buying each player by the franchise and for which the players in return should repose faith in their owners by playing hard-fought cricket. An owner feels aghast and betrayed when their own family member cheats them even after having entered into an agreement with them for a sizeable remuneration.

To substantiate her puzzlement, here is a look at the hefty sum Sreesanth earned in the inaugural edition: $8,00,000. Why would he then fix an over for a ‘lowly’ $80,000? The absurd logic behind it might have been this: a few extra bucks - on zero effort - would do me no harm! Mind you, a decision as crooked and immoral as this would have taken a damn lot of reckless ‘courage‘.

Or is Sree’s accommodation of such treacheries a recent phenomenon? Because Sreesanth now earns, as per his contractual agreement with the Rajasthan Royals, only $4,00,000, which is roughly Rs. 2.1 crores - which is just half of the inaugural edition, despite being very handsome still.

Earlier, Sreesanth had gone on record to state his condemnation on the 2010 spot-fixing scandal involving three Pakistani cricketers - Salman Butt, Mohammad Asif and Mohammad Amir - wherein he cited that such a thing would never happen amongst Indian players because, “we are more ‘educated’ and seniors constantly advice us to watch out for any approaches.” Interestingly, Sreesanth had been nursing an injury during that time when he gave this interview to a leading news channel and was out of the selectors’ radar before making a miraculous comeback in an away tour against England.  But the hot-tempered pacer missed the entire 2012 IPL season (again on injury) in which also he was signed by Rajasthan Royals.

For an established pacer like Sreesanth, who certainly has no dearth of potential and skill, to be involved in such a mess makes one wonder about the absence of self-regulation in players, who aren’t deprived of opportunities but fail to appreciate the value of patience. Sreesanth may have had to wait for an eternity to earn a recall but what should have kept him motivated is that glimmer of hope he still possesses, something which Ankit Chavan and Ajit Chandila lacks, being novice players.

The trio has fallen prey to the temptation of easy money, which continues to pervade the territory of the IPL. Apart from an unprincipled thought-process, the players were lured into the trap clearly because of the relative ease with which such illegal transactions could be realized. We are still uncertain as to whether there involved bigger fishes in this scam, but the betting industry have flourished owing to the lack of a regulatory body to curb such practices. Greenback worth billions is being traded for fixing match-situations by underworld dons and illegal tycoons, black-marketing is rampant with regard to the ticket-sales, hoarding of unaccounted cash, all of this taking place right under the nose of the IPL administrators. The nature of this format makes it a cakewalk for bookies to pocket massive gains, though being a high-risk affair. It may seem an extremely difficult proposition to monitor such transactions but the one common element in all these betting deals might be the prevalence of fake currency in usage, which several police units have tracked down in the immediate past.

The BCCI needs to focus on the supervision of the players ensuring that they readily report to the body in case any agent approaches them. The franchise management can help immensely in this regard. Players may have to even go through security frisking and regular monitoring to check whether they possess cash apart from their pay. The movements of players need to be constantly controlled making them accountable for any untoward incident involving them.

But, a major chunk of these dealings happen via messaging tools like WhatsApp and BBM or through the participation of an intermediary. What then? While monitoring their private life doesn’t seem plausible, their interactions with strangers during odd hours can be under close surveillance, limiting the number of guests they are permitted to meet to a few. But the general public is clueless as to what transpires in these so-called IPL night parties where unregistered individuals have a chance at communicating with players with whom deals can be easily struck. It is in these areas that the BCCI must draw a line and constitute a watchdog-like body to monitor after-match happenings. The players can also be asked to disclose an updated statement of their assets.

While the state has successfully cracked down on these alleged culprits, the BCCI should view this as an eye-opener to dust away the cobwebs, and not just sweep it beneath the carpet. Player education and awareness becomes significant here, with the team requiring to take oaths for the adherence to guidelines which promote the spirit of the game.

Many critics have blamed the inequality in the auction process, in which two players having similar skills and decent stats to their names are priced differentially mainly due to the ‘exposure’ factor. Thus, bowlers of the same trade, for example Ankit Chavan and Pragyan Ojha, are handed contracts vastly different.

The IPL has been hit hard and may face scrutiny, but the real issue is undoubtedly a lack of transparency in the governance front and opaqueness of the fixers’ mindset, which can be effectively addressed by disclosing information on their financial status, which should include their salaried or contractual payments, bank balance etc. Otherwise, bowling an intentional no-ball fetches the beneficiary a whopping Rs. 50 lakhs when that ‘ball’ is actually valued nothing more than Rs.500.

The police have claimed that there is concrete evidence against the tainted players, due to which they will have no other option but to confess their guilt. However, many police interrogations and findings have proven to be baseless in the past so it is only appropriate that the trio be subject to fair judicial hearing to profess their innocence before they are thrashed unequivocally by the media and police sources.

Sreesanth committed a mistake of maintaining bad company with Jiju Janardhanan, who ultimately negotiated deals with the bookies, which landed the RR pacer in a messy situation, remarks his lawyer. Ajit Chandila, Ankeet Chavan and Sreesanth need to be provided with a fair opportunity of telling their side of the story before the legal proceedings commence.

The players have already been cornered by the cricketing fraternity, police and the media owing to their alleged involvement in this spot-fixing scandal, which has tarnished their image which, as many of us understand, is an irrevocable and irreparable damage caused. Being a once-upon-a-time leading pace spearhead of India, Sreesanth is entitled to maximum flexibility to put forth his arguments and not be treated like an outright villain, as his role is indeed a matter of delicate handling owing to his established cricketing career and past reputation.

Unless proven guilty, backed by solid proof, it is foolhardy to jump the gun especially while keeping in mind the recent controversies involving Sreesanth. As of now, the trio is under the “third umpire’s review”. Let us hope the verdict brings out the actual truth, which it has seldom done if the past is any indication.
Posted by Seasonal Magazine at 2:56:00 PM
Labels: Cricket