Does Shikhar Dhawan Expose the Only Goodness of IPL? 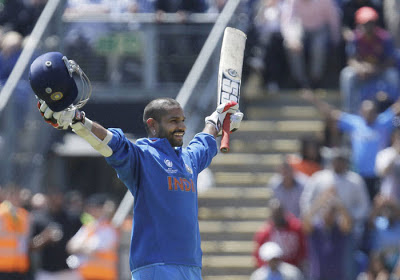 By Carl Jaison:
The advent of IPL in 2008 is interestingly similar to the ushering in of globalization during the early 1990s. There developed a mutual exchange of ideas and inter-continental cultural reciprocity. Cricketers belonging to varied nationalities shared a common belonging which resulted in the transfer of vital knowledge from one person to another, that cuts across nationalistic sentiments eventually benefiting the robust and raw cricketing talents of India.

Therefore, when Shikhar Dhawan raced to a quick-fire century of just 80 balls in the first group match of the ICC Champions Trophy against South Africa, little were his well-wishers and cricket analysts surprised. The talented 27-year old, who holds the record for the fastest century by a test debutante, has got a good measure of the world’s lethal bowling attacks owing to his exposure in the IPL. What was commendable was the manner in which he went about pacing his innings in conditions hostile to visiting batsmen.

The IPL stint has indeed helped upcoming players like Dhawan, Rohit Sharma, Umesh Yadav etc to fine-tune their skills and rub shoulders with the best in business. Sharing the dressing room with one of the top-class left-hand batsmen in world cricket, Kumar Sangakkara, Dhawan has grabbed his opportunities with both hands, both of whom represented the Sunrisers Hyderabad outfit.

Shikhar Dhawan walked in to bat, with a newfound opening partner in Rohit Sharma. It was the latter who first went for the kill, all guns blazing, playing on the backfoot using impeccable technique. All this while, Dhawan was enjoying his partner’s entertaining innings and at the same time, mentally preparing himself for a similar assault on the bowlers. When Rohit was inching closer to his half-century, Dhawan was about 20 runs behind. It was then that the curly-moustached southpaw unleashed his true self, marauding the bowlers at will and in the process, spoiling left-arm spinner Robin Peterson’s bowling figures. He shimmied down the track to spinners and dealt the speedsters with absolute ease. It was an innings effortless to the eye.

For someone who was awarded the man of the tournament in the U-19 World Cup close to a decade ago, Dhawan’s rise to fame is a late blossom. What catches the eye almost immediately is his warrior-like demeanour. His trademark moustache reminds one of the cast in the 2000 blockbuster Hindi movie, Lagaan starring Aamir Khan. His latest appearance in cricketing circles has surely meant that if chosen for a Bollywood role, Dhawan may give the Aamirs and Ranbirs a run for their money in movies befitting of his style.

Dhawan’s maiden ODI century helped India amass 331 runs, thereby marking his arrival onto the big stage. This is what he had to say after the game, “I’m naturally courageous”. India convincingly defeated the South Africans by 26 runs to start their campaign on a positive note. Indian fans salute the IPL for having ‘exposed’ Dhawan and Co to the once-upon-a-time feared pace attacks of the world. That takes care of IPL’s good ‘expose’. The bad ‘expose’, however stole the limelight.

IPL, in just its 6th year of existence, has already evolved into one of the richest sports leagues in the world. Thus, it too has experienced its ‘fair’ share of muck. This was deemed to happen for the sheer quantum of money involved in the tournament. The most unfortunate unfolding was when players were alleged of being lured into tangible temptations, thus eroding the image and credibility of the brand. The recent IPL has brought to light the involvement of underworld nexus and betting syndicates ruling the roost and deciding the outcome of a game. The disturbing news of alleged links of these players with Dawood Ibrahim and associates has sent shivers down the spine of the ordinary cricket fan. Franchisee owners have been quizzed by police officers after bookies revealed having made betting deals and negotiations with them. Gurunath Meiyyappan, CSK team owner, has admitted to betting and leaking insider information to agents, which is clearly at loggerheads with the moral ethics need to be followed by stakeholders.

The police claims to have procured evidence disclosing ‘honey traps’ laid for luring cricketers by bookies, which will only make things murkier. With the Delhi and Mumbai Police engaging in a professional ego clash for who has the requisite ‘burden of proof’ to move a court judgment in their favour, cricket administrators have been left probing with questions about the appointment of BCCI office-bearers after Sanjay Jagdale and Ajay Shirke voluntarily resigned from their respective posts following the spot-fixing scandal. It took an eternity and immeasurable amount of media pressure for N Srinivasan to step aside as BCCI President. In a flash, a desperate Working Committee assigned erstwhile BCCI President Jagmohan Dalmiya the dirty job of overseeing the spot-fixing investigations and official paperwork as interim President. Prior to Srinivasan’s reluctant abstinence from the top job, a series of resignations mounted pressure on the various Presidents heading their respective state cricket associations to quit, as well as IPL Chairman Rajiv Shukla. Even Asad Rauf has been removed from the panel of officiating umpires for the ICC Champions Trophy after news broke out that he too had a hand in the spot-fixing fiasco.

IPL is two-faced. On one side, we witness the advantages of exposure to high-quality cricket which has helped nurture fine cricketing talent from across the globe while it’s darker side provides us with a glimpse into the expose of malpractices and avariciousness that has overshadowed the goodness invested in promoting the brand. The manifestations of exposure are discernible from innings like the one Dhawan played against South Africa, while manifestations of expose keep eclipsing the noble works of the former. Take for example the recent questioning of Rajasthan Royals team-owner, Raj Kundra, who is believed to have admitted to betting. Such an ‘expose’ knocked the stuffing out of Dhawan’s century and more importantly India’s victory. That is the difference in the news value for an ‘expose’ over an ‘exposure’.

The undisputed leader of Indian cricket, Mahendra Singh Dhoni has also reaped a good harvest in terms of his brand value owing to his cultivated success in the IPL. Right from the moment he lifted the 2007 ICC T20 World Cup captaining India for the first time up to the last run he scored off his bat, Dhoni’s market price has quadrupled to staggering figures. He features in Forbes 100 most well-paid athletes of the world, ranking an enviable 13th position, thanks to his multiple endorsements and match salaries. More than half the tribute should be attributed to his ‘exposure’ to the IPL.

Both are end-products of the IPL factory. One is valued, while the other is scorned at. Individuals are to be blamed for ruining an opportunity for exposure while the administration is held responsible to an expose. In both ways, the game ends up weeping. Shikhar Dhawan and Co may keep performing to the best of their capabilities while the scandals will continue to smoulder. That way the well-respected efforts of the IPL get diluted by adulteration. Blame it on globalization, not the IPL.
Posted by Seasonal Magazine at 7:29:00 PM
Labels: Cricket