Dr. Raghuram Rajan is Best Not Attacked – Here is Why

With only less than two months to go before his tenure as RBI Governor ends, Dr. Raghuram Rajan has suddenly turned combative with detractors of his policy stance. Apart from the obvious reason that he need not be over-cautious any more, Dr. Rajan’s recent move is powered by India’s latest inflation figures in which Consumer Price Index (CPI) inched up to almost 5.8%, which was a rise for the fourth consecutive month, a development that he had predicted correctly, based on which he had desisted from cutting India’s interest rates further in the last few monetary policy meetings. But there is more to prove why Dr. Rajan and by extension, Reserve Bank of India, is best not attacked for its monetary policy.

The crux of Dr. Raghuram Rajan’s argument during his recent interaction with a team of senior journalists, was simple and straightforward. In his own words, “This discussion (on being behind the curve) keeps going on without any economic basis. You saw the CPI numbers just last week - 5.8 per cent is the CPI inflation, our policy rate is 6.5 per cent.” He also challenged his detractors to prove that inflation is lower.

The RBI Governor does have a point over there, as ever since he assumed office, one of his major thrusts was to ensure a real rate of return to those who save, which means an interest rate meaningfully higher than the inflation rate, and he had succeeded in this pursuit by forcing down inflation at a faster pace than the speed with which interest rates were being brought down.

India is a land of savers, and with no kind of social security or public pension still available to over 90% of the population, falling deposit rates have been a major cause of concern to most Indians.

Secondly, Dr. Rajan has been steadfast to the primary mandate he had received from the government, which is to limit inflation to 6% first, and then to try and bring it down to 4% (plus or minus 2%). It was a mandate that was arrived at after protracted consultations between India’s Finance Ministry and RBI, and on more than one occasion, Dr. Rajan has expressed his passion for limiting inflation, as higher inflation hits the poorest of the poor, the hardest.

On the flipside, Indian corporates have been asking for faster and deeper rate cuts from Dr. Rajan, to make their repayments of debt more manageable, an issue that has already spiraled into Indian banking industry’s worst ever Non Performing Assets (NPA) problem. Though fewer in number, there are a few influential thinkers like Joseph E Stiglitz, the Nobel winning economist, who feel that India should disregard inflation concerns and focus on growth.

So the question boils down to whether Dr. Rajan can be both right or wrong at the same time. While the debate will go on, India’s obsession with GDP growth rate and bank lending rate seems to be lacking in substance, as it ignores bigger problems in the economy that RBI alone is not equipped to combat.

That is the basic premise why Dr. Rajan is best not attacked, even though there are many additional factors supporting such a stance.

If there is one desire shared by all Indians, it is to see a prosperous India. Not just for ourselves, but for all around us. And if there is one strategy shared by all Indians about how to achieve this prosperity, it is spelled ‘growth’. We are hungry for growth. After being taunted for three decades for following the infamous ‘Hindu rate of growth’, we decided that enough is enough, and went in for the kill.

Ironically, the ‘Hindu rate of growth’ of 3.5% from 1950s to 1980s had nothing to do with Hinduism, as projected by Raj Krishna an Indian economist, who coined it, and Robert McNamara who popularized it when he was President of World Bank. It is said that Raj Krishna coined the term postulating that traditional Indian philosophies of ‘fatalism’ and ‘contentedness’ had resulted in such a low growth rate, even while peers like South Korea and Taiwan outpaced India to become developed countries during those three decades.

Krishna was obviously wrong, or maybe he didn’t mean it at all, and it is also hypothesized that it was McNamara who did that connection with fatalism and contentedness by using the term mockingly against Indian philosophies. What is even more ironical is that, ‘Hindu rate of growth’ had everything to do with democratic socialism as espoused by Nehru, and followed diligently by Shastri, Indira, Morarji, Rajiv, VP Singh, & Chandrasekhar.

Following the Balance of Payments crisis during Chandrasekhar’s rule, precipitated by Iraq’s invasion of Kuwait, which required airlifting of India’s entire gold reserves overseas to get a $2.2 billion IMF loan, the next government led by PV Narasimha Rao took revolutionary steps to take India out of the so-called ‘Hindu rate of growth’. Enter Dr. Manmohan Singh, India’s first economist Prime Minister, with his economic liberalization agenda, and on many counts, India hasn’t looked back ever since, growing from strength to strength at high single digits or even double digits briefly. The stock markets too boomed and even Indians started reminiscing about ‘Hindu rate of growth’ in a disparaging way.

Governments have changed many times since then, including from BJP, Congress, Janata Dal, and even a Left backed Congress regime – but none had the intelligence to assess and modify what Rao-Singh combine had unleashed for India. Because, statistics showed that each year of high single digit growth was taking hundreds of millions out of India’s abysmal poverty into its burgeoning middle-class.

But then, why are we cribbing about interest rates and inflation, sitting in 2016?

Oil is at historical lows and staying there, and gold too has not breached its all-time highs. Not too long back, India’s inflation was said to be all imported, driven by oil and gold, among other commodities. Even most commodities we import have crashed, and isn’t it a shame that we still crib about inflation and interest rates?

We need to be ashamed, but it is not about this cribbing; will come back to it soon.

What we need not be ashamed about is our interest rates. Otherwise, we should be able to identify a nation that is growing as fast as us and having a lower interest rate. There are no such nations on the globe. Simply put, it is just not possible.

Get it straight, growth is really spelled as ‘inflation’, and interest rate is only a side-effect of inflation. Whenever there is high inflation, you can’t have low interest rate. Period.

But, first, a look into why high growth invariably causes high inflation. Simply put, what drives high growth is rising money supply and rising credit in the system. Every entity, be it governments, companies, families, or individuals, need to take debt to grow to the next level, and there is nothing that fuels overall inflation higher and higher than rising credit in the system.

This is because the credit business or the banking business has a money multiplier effect. All the long-term deposits coming into the banks, except for what is set aside as Cash Reserve Ratio (CRR), gets multiplied through each cycle of credit. That is why reducing the CRR rate has had an enormous effect on the liquidity in the system, in recent years. At the current rate of 4%, an approximate calculation is that funds from long-term deposits have the potential to multiply by 25 times in the system, if there is brisk credit growth.

So if we need growth, we need to put up with high inflation, but to ensure that inflation doesn’t keep on rising to dangerous levels like in peer countries like Russia or Brazil, we need higher interest rates.

But we could have allowed slightly higher inflation rates and slightly lower interest rates than now, only if we had done a few things properly. And here is where we have a lot to be ashamed about as a nation.

For all its merits, economic liberalization as practiced in India since Rao-Singh combine introduced it, has been very much skewed. We did the easy part like opening up our economy and attracting foreign investments, and we continue to do that even now, thereby exploding aggregate demand of our population, but did little to equally grow the supply side.

50% of our Consumer Price Index (CPI) that decides inflation is made up of food items, and as the nation destined to be the most populous in the world sooner rather than latter, how could we have overlooked supply side concerns is beyond comprehension. How every leader from Narasimha Rao to Vajpayee to Manmohan Singh to Narendra Modi have overlooked this crucial factor, is mind-boggling to say the least.

So, while incomes have grown in India post liberalization, so have inflation which negates the effect. Thankfully, after Dr. Raghuram Rajan coming in, there has been some containment of inflation, but due to the inflationary expectations caused by a robust monsoon, it is again inching up. RBI has only one basic tool in its arsenal – the interest rate – and it is unrealistic to expect that this tool will suffice to battle inflation. This is where we need to be ashamed for a second time. Even with our poor supply side growth, we could have done much better if we had invested heavily in world-class warehousing and rapid logistics.

But the biggest shame is reserved for our continued inability to check the middlemen involved in jacking up the prices of essential food items multiple times a year by simple hoarding mechanisms. They plunder everyone, the whole of India - farmers, consumers, and governments.

It would do India a lot of good to start acting big on the supply side in a comprehensive fashion – by modernizing farming, by creating warehousing & logistics infra, and by eliminating middlemen - which will have a multiplier effect on the nation’s well-being as 50% of our population are still rural and depending on agricultural income, and only their well-being will be the nation’s well-being, directly as well as indirectly.

India needs to shed its obsession with GDP growth rate and the bank lending rate, and focus on ensuring equitable growth, as only that will give room for Dr. Rajan’s successor at RBI to cut interest rates further.

Maybe two years down the lane, looking back from 2018 or 2019, the Government might have more to be thankful about Dr. Rajan’s unwavering focus on inflation rather than growth, as traditionally growth performance has never won elections in India, but is famous for causing major losses for the incumbents, as growth is invariably accompanied by high inflation.

During his recent interaction with media, on the issue of GDP growth figures, the outgoing Governor shared this idea by saying that he has refrained from “thumping on the table” to put a number on GDP growth, adding people sometimes get “overly fixated with a particular growth number”, though numbers like 7.6 per cent and 8 per cent are within the same range.

“There is a lot of frustration with the pace of the recovery but we should remember that it is in the face of two consecutive droughts and with a global economy which has been quite weak. And of course with number of shocks coming from the global economy such as what we saw most recently with Brexit,” he added.

On being asked what note he would like to give to his successor, Dr. Rajan said, “Wait for monetary policy.”

India’s next monetary policy meeting is scheduled for August 9.
Posted by Seasonal Magazine at 6:30:00 PM 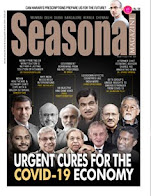