Why Federal Bank – Catholic Syrian Bank Merger is Bad For Both 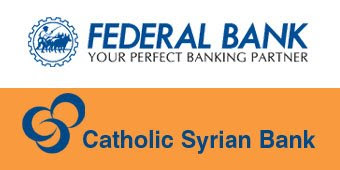 With reports coming in about the proposed merger of Federal Bank and Catholic Syrian Bank (CSB), the big question in the minds of public stakeholders – both investors & employees - of both banks is who needs such a merger.

Branch Network Overlap
Firstly, both banks mainly operate in the same field – Kerala, and some cities of South India. Federal Bank has 615 branches against CSB’s 375. They have similar branches – often nearby to each other – in the same villages, towns, & cities. In other words, a serious overlap of branch networks. For either bank, a tie-up with another with a different geographical spread would be the ideal thing. In fact, Federal Bank was trying for long to find such a match in North, West, or East India.

Catholic Syrian Bank’s Weak Fundamentals
Secondly, CSB is not at a hot-buy as it has so many negatives – it hasn’t completed core banking implementation, it is not a listed company, and is generally looked upon as a not very professional setup. In fact, not many – except for Federal Bank - have come up to buy Catholic Syrian Bank’s largest shareholder Surachan Chawla’s 21% stake in the bank for more than an year now, despite an RBI directive for this NRI to sell to a domestic investor as soon as possible.

Employee Dissatisfaction
The employees of both banks are also not happy with the move, with Federal employees fearing fewer avenues for promotion, and Catholic Syrian Bank employees panicking about job losses. Such fears are valid since the branch network overlap will make many branches and employees on both sides redundant. Catholic Syrian Bank Officers Federation led by Jose Antony has already approached RBI to block the merger move.

Federal Bank Too is Lethargic
Lastly, for CSB shareholders too, Federal is not such a good buyer. The efficiency of Federal Bank is questionable since its total annual business of less than Rs. 55,000 crore is tiny compared with its net worth. For example, excess capital is restricting Federal’s Return on Equity (RoE) to just 13%.

Federal Bank’s Foreign Identity
Federal Bank is also facing another hurdle ever since the new FDI guidelines came into effect in February. Reserve Bank of India has pointed out that under these guidelines Federal Bank should be classified as a foreign-owned bank as its foreign ownership is now 50% or more.
Posted by Seasonal Magazine at 12:18:00 PM