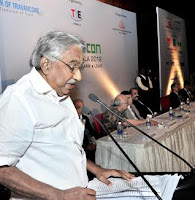 Today, on the second and final day of TiEcon Kerala 2012, Dr. Sridhar Mitta, former CTO & President of Wipro Global R&D, said that we should be humbled by the achievements of social entrepreneurs like Dr. G Venkataswamy, founder of Aravand Eye Hospital chain, who proved that by developing unprecedented efficiency of operations, 50% of patients - falling in the needy sector - can be treated free of cost, even while charging others at market rate or even slightly below it.

Kerala Chief Minister Oommen Chandy who attended the meet yestterday is not leaving all his eggs in one basket. Even when his pet project, Emerging Kerala, went in for a lacklustre close, and even while Kochi Metro one of the largest projects that he is spearheading is facing one issue after the other, Chandy is backing another form of bringing in investment - of backing and developing individual entrepreneurs with their start-ups.

It is noteworthy that Kerala CM has inaugurated an entrepreneurial meet in a state notorious for its anti-entrepreneurism.

Though nurturing start-ups is in no way an economic replacement for attracting investments from big international and national businesses, it is a heartening development that Kerala CM is pitching in for entrepreneurism by inaugurating TiEcon 2012 at Kochi.

Others present at the meeting were Kanwal Rekhi, Founder Trustee of TiE; Ashok Rao, Chairman of TiE Global; and John K Paul, President of TiE Kerala.

Except for the exceptional few, start-ups take almost a decade to make any meaningful contribution to the state’s larger economy. But as the TiE thinktank would vouch for, nurturing entrepreneurs is not about quantitative achievements, but converting many capable jobseekers into job creators for say hundreds, if not thousands of employees.

Unknown to many, even the world’s largest economy, United States of America, really overtook the Japanese and European threats during the past several decades through a sheer focus on entrepreneurism.

How many new startups-turned-big-corps have you seen emerging from Japan or Europe during the last 25 years? Very few. But America has scores and scores of such companies. And it is not just Microsoft, Google, or Apple we are speaking about. It is about the thousands of smaller US startups that collectively employ a huge population of professionals.

But Kerala with its traditional employee mindset and experimentation-averse culture has a huge problem adapting to the new global entrepreneurial ethos. Even Chandy’s own ministry, party, and coalition, are  suffering from the lack of an entrepreneurial culture.

Though the ministry started off with high-profile management training and the sort, things soon degraded to business-as-usual. The twists and turns encountered by the Kochi Metro project is the perfect example. Anyway, Chandy has recently shown a will to prevail, by meeting ‘Metro Man’ E Sreedharan in person, and both expressing their decision to implement the project through DMRC itself.

But anyone would be upset with the allegations that the bureaucratic black-magic that is trying to prevent Sreedharan and DMRC from executing the project is the handiwork of some of Chandy’s party or coalition partners.

It is high time that Chandy himself showed the real entrepreneurial spirit, which is firstly about getting things done in the swiftest possible time at the smallest possible expense.

He should be taking a leaf from one of his political mentors, former Chief Minister, K Karunakaran, during whose regime, projects like Kochi International Airport, Goshree Project, NTPC Kayamkulam, Kaloor International Stadium, Guruvayoor Railway Line etc came up relatively fast.
Posted by Seasonal Magazine at 4:16:00 PM