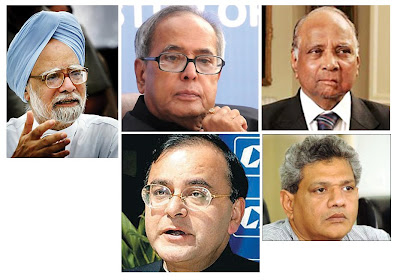 The great inflation debate may have ended in Parliament, but not for the nation that send this Parliament to Delhi. After almost a year of shifting promises on controlling prices, the FM came up with a wisdom that signals helplessness. He finally justified inflation.

The Opposition on its part continued to succeed in putting the Government in a spot, even while failing to come up with constructive 1-2-3 steps in taming the price rise.

The stark reality is that nobody at the top - on both sides - has a clue on the continuing price rise, especially in food materials. The reason is quite apparent. All are expecting these little tinkering with repo and reverse repo to work wonders. They would have worked if India was a textbook. In reality, no nation works like a textbook, and India has repeatedly proven to be an extreme oddity in economics.

And at this crucial difference ends the expertise of not only our politicians, not only our economists, and even our econo-politicians like Dr. Manmohan Singh, Pranab Mukherjee, P Chidambaram, or Arun Jaitley. They are applying and re-applying whatever they have learnt and gained from past experience, and sitting smug on the belief that their fiscal and monetary policies would deliver.

Even worse, each side is readily seeing the picture they want to see, and either justifying, or criticizing the other.

Nobody, even from the Opposition is disputing these numbers, which is a pleasant side-effect of growing at near double-digits for a few years.

But Arun Jaitley has an equally engrossing number. He points to the low inflation levels maintained in comparable high-growth economies like China, Brazil, & Indonesia. Nobody can dare to dispute Jaitley on that, as a few of these economies are still managing food inflation at around 3%.

But the sad point is that within these intense debates two crucial factors are overlooked.

One is the long-term effects of populist measures and the second is the foolishness of focusing only on economics as against efficiency. Take NREGA for example. In paper it was perfect. Even in practice it was perfect for many quarters. But nobody had really factored in the demand surge it would ultimately create.

Does this mean it should be scrapped altogether? Not at all, as long as it is not a cash-for-free program. Payments should be against productive work, and only then it can compensate for the liquidity that NREGA pumps into the system.

The same is true of the microfinance revolution happening across the country. The first microfinance IPO, of SKS Microfinance, is over, and another dozen IPOs are waiting in the wings. Microfinancing is perfect if it funds only means of livelihood, but it can be the worst subprime scenario financiers can create if the funding gets diverted to buy appliances and luxuries.

That much for the demand side of the inflation equation. Both strategies can't be faulted at all as it benefits the most economically deserving segments.

But what about the inflation that Governments have purposefully created, down the years?

Take a look at the way minimum support prices for rice and wheat have shot up during the last 10 years, and anyone will appreciate why this round of inflation was a tragedy just waiting to happen. Instead of improving the quantity and quality of agriculture, the only tweaking that was done to promote agricultural productivity was regular boosts to MSPs. The surge on this front was done with no regard to then prevailing inflation-levels, and finally these surges came back to haunt by way of uncontrolled inflation.

It was as foolish as providing petrol and LPG subsidies for decades, and then trying to correct it overnight, thereby driving inflation further.

The argument that rising MSPs benefited farmers is not without merit, but in the new agricultural market where giant corporations and commodity futures reign, it can be easily seen that the major beneficiaries were not the poor farmers.

It goes to the merit of the Left Front that they remain the only voice against agricultural futures. What was originally a hedge tool for producers against environmental uncertainities has been abused by the filthy rich traders and politicians who have never set foot on a farm, and make millions by the mouse.

Otherwise, what can explain the absurd hike and fall of sugar recently?

Last but not least is the inefficiencies and corruption prevailing in the system. The PDS is in shambles, and there is no agreement regarding the hundreds of thousands of tons of food grains left to rot in our public godowns, maybe due to poor logistics, but more probable due to myopic vision and rampant corruption.

Sharad Pawar feels rotting foodgrains is a matter of shame. Shame for whom?