Can the Chargers Recharge Themselves? 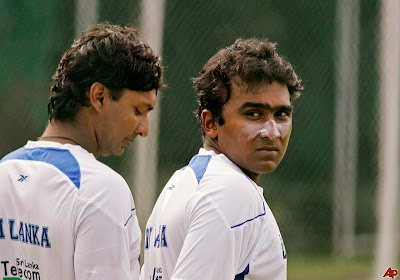 
Tonight, two of  the World’s cricketing stalwarts, Mahela Jayawardena and Kumar Sangakkara, take on each other as their teams gear up for a revival of fortunes after a sloppy showing in their just-previous matches. Both former Sri Lankan captains are looking for a victory before they leave for the England tour and both realize the importance of keeping the winning momentum going within the team.

As far as now, Kochi has stunned heavyweights like the Mumbai Indians, Chennai Super Kings and Kolkata Knight Riders, leading the pundits to tag them as giant-killers. Kochi was on a juggernaut after a hat-trick of wins but a pathetic performance against the Rajasthan Royals saw them surrendering the match meekly without much of resistance or resilience. The injury to New Zealand star batsman, Brendan McCullum, who is also Kochi’s best batsman in the IPL so far, might have dented their chances against the Royals but Kochi need to play as a team to come up with satisfying victories. The lone dependence on McCullum may hit back at them after their batsmen’s poor showing against Shane Warne’s men in blue.

Like every other match, Kochi will be hoping that the awesome pair of McCullum-Jayawardena gives them a blistering start once again in those first 6 shot-making overs. The form of Brad Hodge concerns the team and we might as well see Michael Klinger taking his place in the line-up for the inconsistent Hodge. Ravindra Jadeja has been a revelation for the Tuskers as he has come up with match-saving performances whenever the situation demanded. However the rest of the batsmen, Parthiv Patel, Kedhar Jadhav and Raiphi Vincent Gomez are yet to prove their utility for the team.

Though Parthiv has a few quick-fire 30’s under his belt, the wicket-keeping batsman from Gujarat hasn’t seen his team through till the victory lap. Jadhav has played just a couple of games but chances are limited for the young man and it’s high time he proves his credentials. Raiphy doesn’t have performances he can boast of but his all-round ability may favour his chances of making the cut into the final XI.

After initial hiccups, the Tuskers bowling seems to be getting back into the rhythm and groove, but Muralitharan’s bag of tricks is slowly loosing it’s sheen as the 800 test-wicket taker has only a few wickets in the games he has bowled. Even local lads are playing his deliveries with ease and confidence but the proven veteran might have a few more tricks up his sleeve before he can hang his boots. RP Singh and Vinay Kumar are improving match by match and they will try to be more consistent in their approach.

Nothing has been going right for the Chargers so far and they look a demoralized lot. Even the cleverness and flair of their skipper Kumar Sangakkara hasn’t impacted the team’s performance. There is no batsman from their side who features in the top run-getters list and the bowlers too haven’t spun the team to credible wins. Deccan Chargers is sorely missing the hard-hitting batsman, Kevin Pietersen, who is currently nursing an injury and isn’t available for further participation in the IPL.

However on the positive side, Chargers have found unlikely heroes in Sunny Sohal, Bharat Chipli and Harmeet Singh who have created reasons for joy in the Chargers’ camp after their match winning showings in this year’s IPL. Local lads have proved their mettle but the big foreign names have been flop shows till date. Sangakkara, JP Duminy and Daniel Christian have only come up with mediocre performances which aren’t enough for the team’s winning cause.

The Chargers are languishing at the bottom of the table and a win for them will boost their semi-final hopes while a loss will practically close down their IPL dreams. Their bowling attack looks far more potent and deadly with the new-ball pair of Dale Steyn and Ishant Sharma, well supported by Christian’s hit-the-deck bowling. Spin options in Ojha and Amit Mishra augurs well for them but their plight is similar to that of Murali’s.

It is a battle between Kochi’s batting and the Deccan Chargers bowling. Victory for either one of them means moving into the top half of the points table and regaining momentum as the tournament is nearing a tight finish for the last 4 spot. After all, T20 is all about momentum.
Posted by Seasonal Magazine at 7:12:00 PM