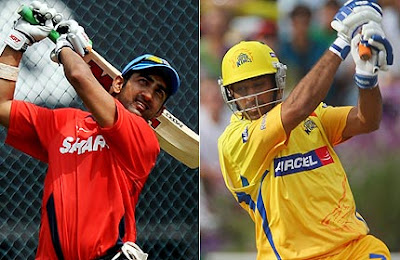 
Lights, Camera, … IPL! The first scene, first shot of this blockbuster movie is scheduled to go on roll today 8.00 p.m. All roads, on Friday, will lead to the Chepauk Stadium, which hosts the opening take and the cast is all ready to go by the script, which promises to be a cliff-hanger and a smashing match-up. You can be sure that once that IPL blare is let out, everything is destined to be a sort of rush-hour situation, where your hearts will yearn to stop thudding, but sadly, this part of the  world is all about fast and furious cricket.
Fittingly, the 4th sequel of  the IPL guarantees to be an edge-of-the-seat thriller with the rapidly growing relationship between cricket and tinsel town. And that very fact makes IPL more than just cricket. It’s like a cricket carnival where everybody is in a festive and joyous mood and even the smallest of incidences has the biggest of impacts. In split-seconds the script can be altered even if any one of the cast hopes to add a little more tinge to his act. And with the cheerleaders donning mere bits and pieces of attire, all-in-all, a cracker of a contest is expected to transpire.

Two men who together weaved a batting alliance and fetched India a trophy that has eluded them for 28 years will involve in a tussle which not many die-hard Indian fans will want to witness. MS Dhoni (Chennai Super Kings [CSK]) and Gautam Gambhir (Kolkata Knight Riders[ KKR]) are undeniably the two superstars that will lead their respective teams onto the battlefield of Chepauk with cries for war filling the air. CSK have managed to retain and re-buy most of its former players and that makes them a force to reckon with. The momentum is in their favor along with their past taste of success.

But what team will CSK field today? Going by their exposure and performances in the IPL, the Indian trio of Suresh Raina, Murali Vijay and Subramaniam Badrinath is sure to be in the roster. With Dhoni behind the stumps, the team will closely take a call on the four foreign players who they would play. Chances are that Scott Styris, Mike Hussey, Albie Morkel and Tim Southee look strong contenders to find a place in the XI. Ravichandran Ashwin will once again share the new ball with either Southee or Morkel and his experience of playing with CSK will come in good stead.

The opening partners slot will be a toss-up between Anirudh Srikanth and Badrinath as Murali Vijay seems to have cemented his berth. CSK will pin their onus on their stupendous batting line-up to ensure them victory as the bowling may come a cropper. They will miss the services of Muralitharan and Balaji but the in-form Southee can do the job, if asked to. If Chennai can pile up a huge total, batting first, KKR will automatically be on the backfoot. But, with the kind of batting they possess, it would be best if CSK chase a scoreboard total.

As far as it goes for KKR, all eyes would be on Gambhir to put up a stellar show. KKR is a revamped and rejuvenated side after their disastrous showings in the three previous IPLs. The owners have been spot-on in buying players of the calibre of Jacques Kallis, Eoin Morgan , Ryan ten Doeschate etc.

Manoj Tiwary has become a household name in Kolkata and the young lad is expected to open the batting with his skipper. Kallis fits perfectly in the one-down position and the No.4 spot will either find Morgan or ten Doeschate with the former being in top notch form. Ryan is more of an asset to them with his ability to strike the ball long and  can roll his arms over. Brad Haddin might be the glove man and he too is in rich form. Yusuf Pathan’s fireworks down the order will help KKR post a decent total and if chasing, the man can do it all by himself, also adding to his off-break bowling  Laxmi Ratan Shukla at No.7 lends stability to the side which has been looking for such a combination for a long time.

The bowling department will be headed by Brett Lee, who has had a great World Cup alongwith Chennai recruit, Laxmipathy Balaji, Jaydev Unadkat and either Pradeep Sangwan or left-arm tweaker, Iqbal Abdulla. Compared with Chennai’s bowling, KKR has in it’s bowling more variety and skill. Kolkata would love to put up a massive total, batting first, as they have the bowlers that can choke CSK later on.

The face-off between India’s cricketing superstars, Mahi and Gauti, is sure to bring in the crowds for a match which is to be contested between the two top teams and a victory for either of the teams means the winner can start off well in the 41-day tournament. The match has all the qualities to be a pulsating and high-wattage opener and it waits to be seen whether Dhoni or Gambhir will have the last laugh.
Posted by Seasonal Magazine at 4:20:00 PM