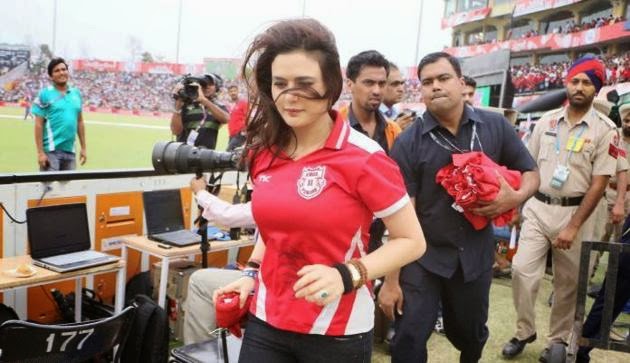 
Poor application hurt Punjab’s chances to qualify without much hassle as now they lock horns with a threatening CSK in the Second Eliminator scheduled to take place tomorrow. KKR dominated most parts of the game and even the erratic rain breaks allowed them to regroup and chalk out a strategy for the final few overs, though they would have so wished to have at least one mainstream batsman for a late flourish. However, the lusty blows delivered by Surya Kumar Yadav, Ryan ten Doeschate and Piyush Chawla were enough for KKR to muster a decent total to defend given the usual difficulty in chasing a target in crunch matches.

If the rain breaks came as a blessing for KKR, on the other hand, they led to the ultimate downfall of KXIP who lost all momentum after Karanveer Singh’s two-wicket burst followed by Aksar Patel’s fine display of left-arm spin almost choked KKR. Punjab’s batting too looked purposeless as barring Manan Vohra, none of the other batsmen were raring to get a move on and manage their run chase in accordance with the par score in the event of the D/L method coming into play. However, what ensued was a dramatic batting collapse that almost ensured KKR’s smooth sailing into the final.

Rishi Dhawan and George Bailey hung around for a while just delaying the inevitable but full credit goes to Gautam Gambhir for the way he kept reassuring his team about the advantageous position in the match. Maxwell once again failed to unsettle the KKR bowlers, who proved that they possess, by far, the best bowling attack in the tournament. All the KKR bowlers played their part to perfection and provided the team with the much needed confidence going into the final.

Against the CSK, Bailey will have his task cut out following their opponent’s experience of having played an elimination match. Punjab also needs to look into its back-up options in their bowling department especially after the ineffectiveness of Rishi Dhawan, Parvinder Awana etc who were undisciplined in their lengths and preferred to experiment rather than stem the flow of runs.

Sandeep Sharma should make for an automatic choice as and when he regains fitness, in place of either one of the aforementioned players, as the youngster has shown tremendous skills and patience as a new-ball operator.

Opening partnership has become crucial for Punjab as they have often laid the platform for the Maxwells and Millers to go for the late assault. While Vohra has been the more aggressive opener in the squad, Sehwag’s initial flourishing strokeplay has pegged back the opposition and severely dented their recovery from his trademark ‘ambush’. Having said that, Sehwag has struggled to take on the spinners with finesse and has time and again failed to dominate over them.

Maxwell, on the other hand, needs to settle down first and set himself in before exploding into big shots. He has found it difficult to play the ball that sharply comes back in and has occasionally fallen prey to leg-before decisions due to his uncanny tendency to shuffle across too much to make himself room on the on-side. Saha, Miller and Bailey can play the long handle to good effect but Punjab’s middle-order batsmen should work towards preserving their wickets even if the top-order falters at the start.

Dhoni can now confidently challenge the KXIP after his team outsmarted the Mumbai Indians in all facets of the game. Chennai appeared little scratchy coming into the Qualifiers after stumbling in their final matches and needed their batsmen to come out all guns blazing. Arguably the strongest batting line-up in the tournament, the CSK batsmen clearly knows their respective roles and the coming of David Hussey has only further strengthened their chances. Though their pace-bowling department doesn’t boast of big stars, the spinners have more than compensated with their accurateness and economical bowling figures. Ashwin and Jadeja have satisfied their skipper whenever the ball is thrown to them and both of them are among the leading wicket-takers too.

However, the biggest asset for CSK has been the prolonged success of their No.3 batsmen Suresh Raina, who holds the rare distinction of having scored more than 400 runs in every season of the Indian Premier League starting from its inception. Currently, the southpaw is also the leading run-getter in the IPL having amassed more than 3000 runs, including close to 25 half-centuries.

Raina’s form was critical as his patchy performance this season was overshadowed by the blistering form of Dwayne Smith and McCullum and against the Mumbai Indians, he showed his class by timing his innings to perfection and almost single-handedly managed the CSK run-chase. Dhoni will fancy his chances given the outstanding form of most of his teammates. Mention must be made of Mohit Sharma, who currently holds the Purple Cap for emerging as the leading wicket-taker, and his wicket-taking ability has earned him a place in the Indian cricket team squad.

Mumbai Indians, for the time being, will aim to make it to the Champions League Finals after fighting it out in the qualifying tournament. CSK and KXIP are poised to play a tough match given the strong batting line-ups of both teams. If CSK can pick up early wickets, they surely stand a chance of going through to the final but Punjab has the wherewithal to bat them out of the match. Punjab will keep in mind that they have chased down mammoth targets set by the CSK in the past but what will be the scenario if Punjab has to defend. The final may well be decided by which team holds the upperhand when it comes to bowling at the death overs as containing power-hitting batsmen in both sides won’t be easy.