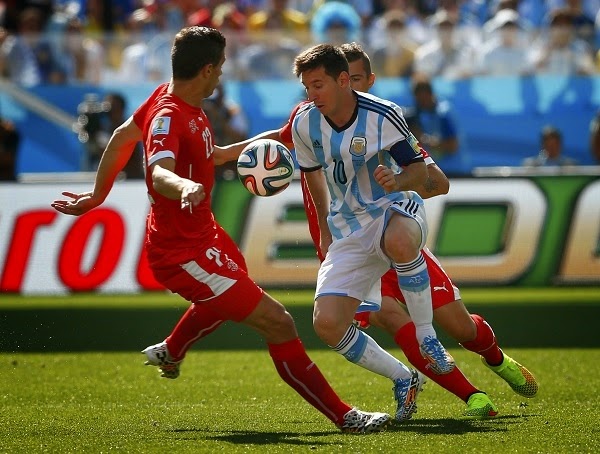 
The much awaited FIFA World Cup 2014 has reached its nail biting stages. Only 4 out of 32 still remain in contention of the prestigious World Cup ­ Brazil, Germany, Argentina, & Netherlands. Both Brazil and Germany started the World Cup as potential title winners and Netherlands and Argentina were considered to at least reach the last 4. Thus the tournament hasnt been hugely unpredictable but currently the title is within the reach of any of the four teams and the game is still on.

The hosts, Brazil were expected to carry on their fine form from the Confederations Cup to the World Cup and they didn’t disappoint. Brazil, playing in their own soil has a huge home advantage over any of their fellow semi-finalists. But, a major setback for them has been the injury of their star striker, Neymar who has been ruled out of the rest of the tournament with a back injury. The Brazilians will be cursing their stars and blaming lady luck as after all a Neymar­less Brazil is considered to be a toothless tiger.

Their next opponent in the semi finals are the ruthless Germans who started off the tournament in marauding fashion by thrashing Portugal 4­0 . From then their form has dipped a bit and it went even lower against their pre­quarterfinal match against Algeria where they fought tooth and nail to edge them 2­1. But the quarterfinal match against France was all what Germany needed to restore their pride when their defence looked extremely solid against the threatening French attack of Benzema and Giroud. This is the fourth successive time that they are reaching the semis and coach Joechim Loew will be rubbing his palms in anticipation that his team will go all the way and clinch the title this time around. The German side boasts of many talented players and they will obviously be the favourites when they lock horns with Brazil. However just because the hosts will be playing without Neymar doesnt mean one bit that they will be easy pushovers as they are expected to give the Germans a run for their money.

The other semi-final leg will feature last World Cup's runners-up, Netherlands against the Messi­magnified Argentina. The odds are stacked 50­50 as any of the two teams can overcome the other and go on to the finals. The Dutch who has been rejuvenated under their new coach, Van Gaal, started the tournament by avenging their defeat against last cup winners, Spain. A 4­1 thrashing of Spain was all that was required to erase their loss 4 years ago. The Dutch players all look in good touch with Robin Van Persie, Wesley Sneijder, Dirk Kuyt, Klass Huntelaar, and Arjen Robben, all in fine form. Although their quarterfinal match against a stubborn Costa Rica wasn’t very convincing they did manage to sneak off with a win in the shoot­outs. Argentina on the other hand kept getting better with every game they played and their star player, Lionel Messi has been very instrumental in all of their wins. Angel Di Maria too has been one of their consistent performers and it will not be much of a surprise if Argentina manages to carry on their form to the finals.
Posted by Seasonal Magazine at 6:43:00 PM