Why Kiran Bedi is in Full Force Behind Modi - Exclusive Interview 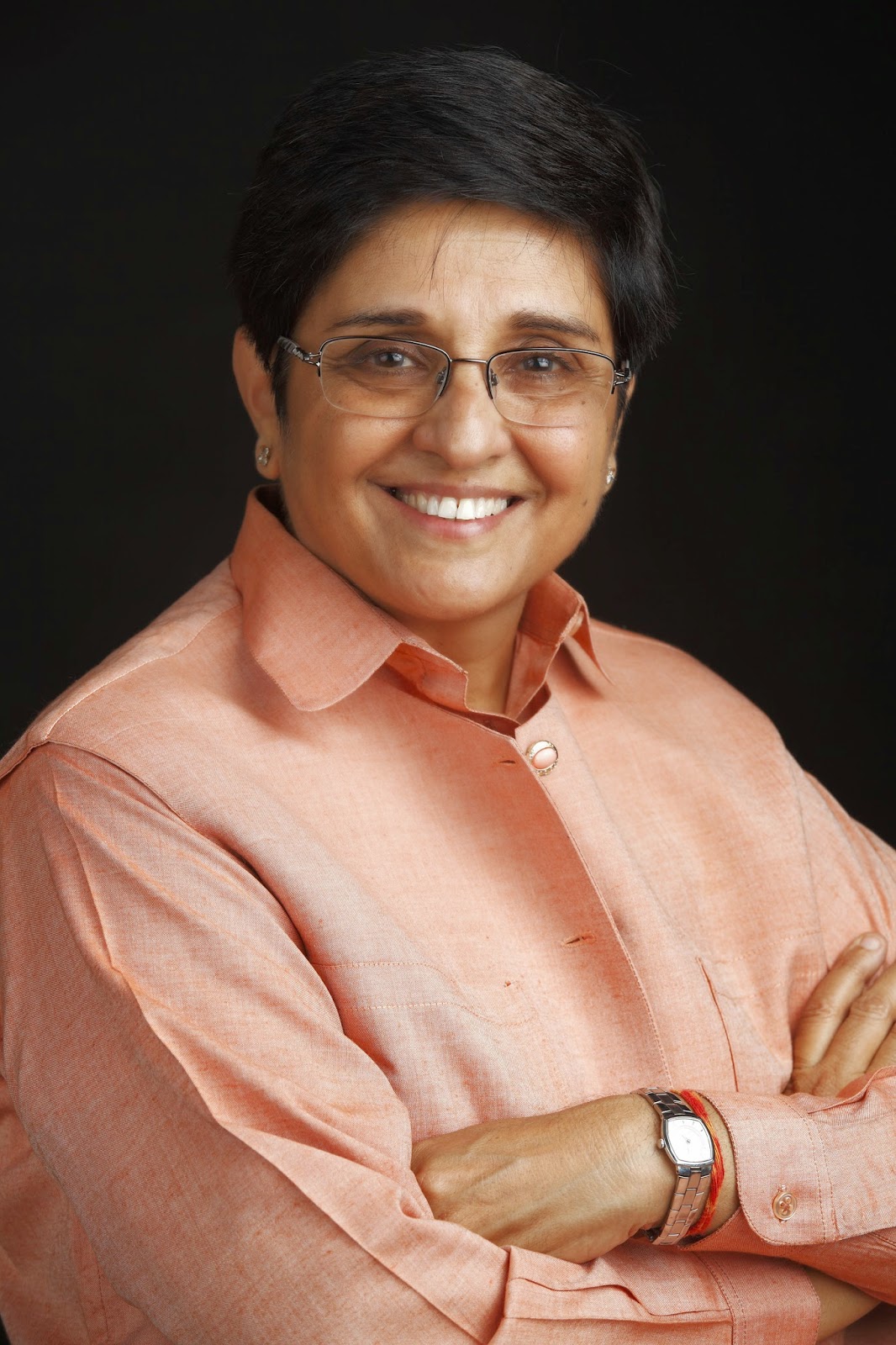 Kiran Bedi is continuing her offers to volunteer for major socio-political causes. The latest has been that, based on her unique track-record in drug addiction rehabilitation as well as anti-narcotic works, she has offered her home state of Punjab her services to combat the drug menace plaguing it.

She is overflowing with emotion when speaking about Modi. But when speaking about former pals Arvind Kejriwal & Co, this former anti-corruption activist is at best only diplomatic. How did she change so drastically within a matter of less than one year? Is she being plain opportunistic?

For her credit she joined the Modi bandwagon not after the exit poll results, but right before the elections. So, if this is not being opportunistic, what is it? That is what is called Modi Magic. The phenomenon of how a state’s CM marketed himself brilliantly into the PM’s post within a period of less than one year.

But like the 31% of the voting voters who opted for BJP this time, Kiran Bedi started believing that UPA is hopeless and that AAP is finished, and, most importantly, that Narendra Modi’s promise of good governance may play out well for India.

Speaking about governance, she knows a thing or two about good governance, because she had bagged her Magsaysay in 1994 for exceptional service in the government. In any case, Modi as well as all his supporters including Bedi are currently on the winning side.

But Bedi might be guilty of going overboard in enthusiasm by announcing her unsolicited availability as BJP’s Chief Ministerial candidate for Delhi, which was promptly snubbed by the Delhi BJP unit.

But that hasn’t made her change her stance on Modi again, and shows that her respect and regard for Modi is very true.

It again came out in the open when Modi’s Government took the difficult decision of increasing railway fares substantially before the rail budget itself. She was perhaps the only voice from the activist/NGO sector to voice support for the very non-creative and across-the-board fare hike.

But she is not afraid to be alone, as she had been alone many a time in her life, including when she became the first ever woman IPS officer in the country.

But finally, can any development finally make her lose her faith in Modi? What if Modi ignores her completely for five years? Only time can tell.

But one emerging area of likely conflict is a recent IB report that paints many in the NGO sector as anti-national for getting overseas funds, and the signals from Government that the report will be taken seriously especially if NGOs pose a hindrance to land acquisition and development. As a hardcore NGO-type activist who even took VRS from IPS to pursue that difficult life, that might be too much to accommodate for Bedi.

Which activist with a track-record can digest such a report from IB and its backing from the government? Certainly not this woman leader, who once transformed Tihar Jail positively, and who continues to transform jails across the country through her NGO activities.

But as of now, she is staying put in the Modi camp, arguing that Modi and team needs all our support, which is a stand that can’t be faulted at all, because he is so young into the difficult job.

Seasonal Magazine interviews Kiran Bedi on how the Modi Government has been faring and her personal support for it:

You have welcomed the steep railway fare hike. But won’t it worsen inflation? Why couldn’t the government spare even the unreserved and sleeper-class fares that would have helped the poorest passengers without affecting revenue growth much? And why not an incremental or staggered rise in freight fares to limit inflationary expectations, just like it is being practiced in diesel and now being planned for in LPG?

It is time for tough decisions. Undo the wrongs of the past. And continue to live up to people's trust. Tough decisions are taken by tough people.

New Delhi being the capital of the whole country, don’t you think the current hike further alienates commoners who have to travel to the capital city from far-off places like Thiruvananthapuram, Chennai, or Bangalore?

Live in reality. It's hard. But it [railway fare hike] has come 10 years late.

What do you assess yourself as your greatest achievement? Was it being the first woman IPS officer, was it the prison reforms that you initiated, was it the Magsaysay award, was it your NGO activities, or was it your association with IAC?

Being a worthy daughter of a worthy family. And [being] a proud Indian.

Intelligence Bureau has recently come out with a damning report on NGOs getting overseas funds as an anti-national activity. You are uniquely qualified to address this issue as a former police officer as well as an NGO leader. Where do you stand on this issue?

I have no access to details. Hence cannot comment.  But NGOs are unique. It's not for positions or dependencies.

As a founding leader of India Against Corruption movement (IAC) in 2010, whose flagship demand was Jan Lokpal, how important is that aim for you today? Why have you decided to side with BJP, which is not too keen on Jan Lokpal as Anna Hazare envisaged it?

Good Lokpal has been legislated. Rules are being corrected by the current government which were left weak by UPA.

What really caused the split between Anna Hazare and Arvind Kejriwal, according to you, since you were an insider in IAC operations during those days?

Conversion of the movement into his political party.

During the split, you obviously backed Anna Hazare’s ideology to remain apolitical and vehemently opposed Kejriwal’s strategy to turn political. Why did you change from this stance and decide to turn political by backing Modi and offering your candidature as Delhi CM?

I have only said in case my services are needed I am open to [being] consider[ed]. Earlier I had said I am not available at all.

I do not wish to comment on his performance. I wish him well.

Do you think there has been any change in day-to-day corruption at the level of officials interacting with the public, post Modi Government assuming office? If not, is an anti-corruption movement like IAC still needed, according to you?

Right now we need to support the government we have reposed our trust in. And not just oppose. This government has a very tough task at hand. Our duty is not just to vote in but now support it to succeed too. Of course it must perform in a manner that is for the best interests of the country. Present and future.

If AAP, or even a new IAC like movement, creates civil disobedience or potential anarchy on the streets again, do you think Modi Government’s reaction will be as sober as that of UPA’s?

Were you surprised by the resistance to your Chief Ministerial candidature, from within Delhi BJP?

No not at all. I am sure I am not needed. They will have excellent candidates. I have offered to be a last resort if need be.

Transparent funding of election campaigns has been a major plank of IAC, and though it didn’t contest in elections as IAC, it was fair in its financial disclosures. Coming from such a lofty background, how can you rationalize with the opaque funding patterns of a mainstream political party?

I am not too sure of the first part of your statement. Of course we have to move towards total transparency. In all public affairs.

According to you, how much autonomy will CAG, CVC, Lokpal, CBI, & RBI enjoy under Modi? As a former illustrious police officer, do you think the law & order machinery in the country is enough to deliver justice to even the weaker sections of the society without fear or favour towards the mighty political class, or should the law & order setup be overhauled? Do you expect Modi to undertake the overhauling?

India needs a social revolution. A new mindset of patriotism and national character. Lets see how Mr Modi leads it. And we too as people in our own respective areas of influence.
Posted by Seasonal Magazine at 12:10:00 PM