India's Tour of South Africa 2018: Can Rohit Sharma Give Kohli A Run For His Money? 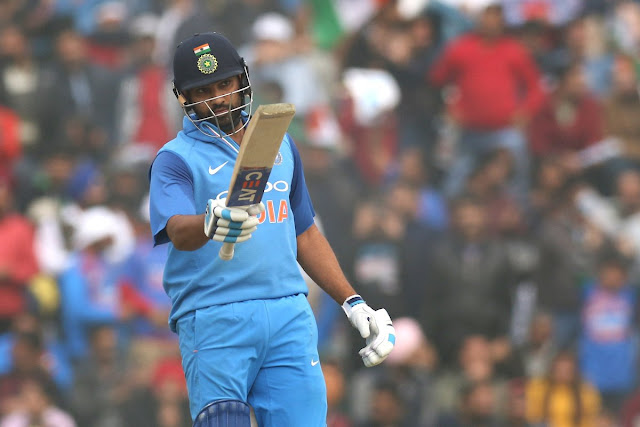 Life would have taken a different turn for one of India’s most prolific run scorer this season if he had opted to become an off-spinner during his formative years. The man in question is Rohit Sharma, who captained his side to a thumping 3-0 victory over the hapless Sri Lankans in the recently concluded T20 series. Today, Rohit is the proud record holder of the joint-fastest T20 century en route to his blistering knock of 118 off just 43 balls in the second T20 match against the same opposition. In doing so, he also recorded the fastest ton by an Indian across formats and became the first from his country to score two centuries in T20Is. The knock, which included 12 fours and 10 towering sixes, helped him to secure yet another record: the most international sixes hit in a given year by any batsmen. Rohit ended the year with 65 hits over the boundary ropes to beat AB De Villiers’ tally of 63 sixes that he had achieved two years ago.

There was never any doubt about his potential or talent. But, Rohit Sharma elicits stark opinions unlike any other cricketer, at least in India. You either absolutely love him or detest his very approach to the game. There is no credible middle ground position. Rohit, or “Hitman” as he’s fondly called by his ardent fans for his nonchalant ability to hit big shots, has had a rocky journey so far. He became an overnight sensation after his unbeaten 50 helped his side beat South Africa and progress to the semi-finals of the ICC T20 World Cup 2007, which India famously won under Dhoni’s debut captaincy assignment.

However, over his 10-year cricketing career, Rohit has faced incredible odds and unfortunate circumstances, although compounded by his lackluster performances when the selectors had given him plenty of opportunities to redeem himself. Back when he struggled to cement his place in the team, many were left scratching their heads wondering why have consistency and the luck factor been eluding this immensely talented Nagpur-born lad.

Rohit’s baby steps in international cricket was promising. In just his third international series, Rohit demonstrated his maturity by coming up with crucial cameos and composed fifties under pressure in the CB series in 2008. However, his subsequent performances didn't match up to that level (his average was a pedestrian 22 and his strike rate was below 70) and he failed to cement a place in the side. To make matters worse, his inconsistency kept him out of the 2011 World Cup squad.

In another missed opportunity, he was named in the Test XI that was scheduled to take on South Africa in the first Test of the 2010 home series in Nagpur. However, Rohit injured himself while playing football on the morning of the Test and was subsequently ruled out of the series.

Although he impressed in the home and away ODI series against West Indies, in which he bagged the Man-of-the-Series awards, Rohit couldn’t carry on the momentum in the crucial CB series against Australia in 2012. Following this he had a disastrous outing in the tour to Sri Lanka, where he generated a string of poor scores that makes for an unenviable reading. The frustration of the fans was understandable as Rohit had a remarkable outing in the IPL in the same year.

However, these setbacks didn’t deter the fighter in him. The turning point came when he was asked to open the innings at Mohali against England and he responded with a fluent 83. The decision to make Rohit open the innings was a masterstroke and he grabbed the opportunity with both hands. The swashbuckling opener alongside Shikhar Dhawan proved to be the answer to India’s opening partnership woes after the void left by Sachin Tendulkar and Virender Sehwag.

Currently, Rohit is one of the most explosive openers in the ODI format. Rohit has 14 ODI hundreds since he started to open the innings for India from January 2013. He is only behind South African Hashim Amla in the same time span coming out to bat at the same spot. His records speak for themselves, none more illustrious than the three double centuries to his name. Rohit’s change of temperament and approach to the game is noteworthy. He has overcome some pesky technical issues and endured strenuous training drills to emerge fitter than before. Suddenly, Rohit has receive adulation from across the board and he has undoubtedly proved his indispensability to this Indian team. Here is a brief look at what has contributed to his phenomenal run of form.

ABILITY TO PLAY THE LONG INNINGS IN ODI 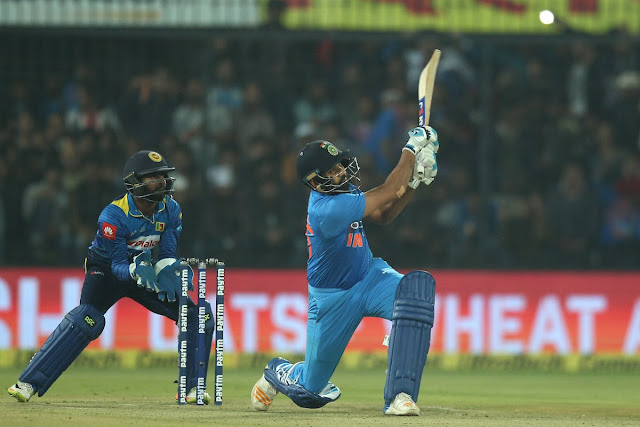 Rohit Sharma is a delight to watch when he is on song. There are few players who can demoralize an opposition like he can. If playing those silky cover drives or piercing the gap square off the wicket weren’t enough, Rohit has now presented opposition captains with a fresh headache because of his newfound ability to bat for longer hours. He has put this mantra to good effect in the ODIs courtesy the three double centuries to his credit. Earlier, he would be circumspect with deliveries teasing him outside the off stump. He also had the tendency to plunge his front foot forward far too early making him a potential LBW candidate. But if you have closely observed his technique recently, it is evident that Rohit has mastered the art of playing the ball as late as possible. This has allowed him to punish deliveries outside the off stump over the third man region with minimal risk and flick the ball off his pads to deep mid-wicket. The benefit? It has enabled him to patiently negotiate the spinners when they usually begin their spells after the first power play overs. Before, he would barely survive beyond the 10th or 15thover. Rohit has the finesse to hit the ball through the line because of his stupendous timing but he makes it a point to wait for the right moment before he unleashes his quick fire hands. Therefore, there is a technical aspect to his ability to bat for the full quota of overs. Rohit has 16 ODI hundreds now, the fourth most by an Indian batsman after Tendulkar, Virat Kohli and Sourav Ganguly and 5 of those knocks have been for 150 runs or more. It is anybody’s guess what he is capable of doing if he adopts a similar methodology in the Test format! 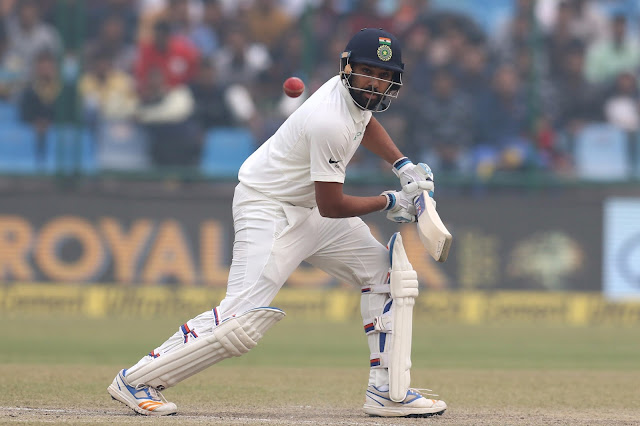 It’s not by pure magic that Rohit plays the long innings with artistic ease. The swashbuckling opener has developed a more resilient mind over the years. It is not unfair to point out that he is the one player who is always singled out for unsavory treatment every time the team bites the dust. While he is partly to blame for throwing away his wicket at crucial junctures, Rohit has worked out the mental aspect of his game rigorously. He puts a price on his wicket and now bats with tremendous authority and surety. Notwithstanding the fact that successful IPL seasons have helped him to a great extent, Rohit is a thinking cricketer. Previously, he would have a game plan but would fail to show up in big games. Here, there can be a fitting comparison made with Arsenal midfielder Mesut Ozil, who can mesmerize fans by his boundless talent. But like Rohit, Ozil “disappears” when the team expects the most out of him. However, Rohit 2.0 has built his confidence levels up with a string of match-winning performances and this has enabled him to beat the opposition even at a subconscious level.

SHOULDERING RESPONSIBILITY IS THE PERFECT ANTIDOTE 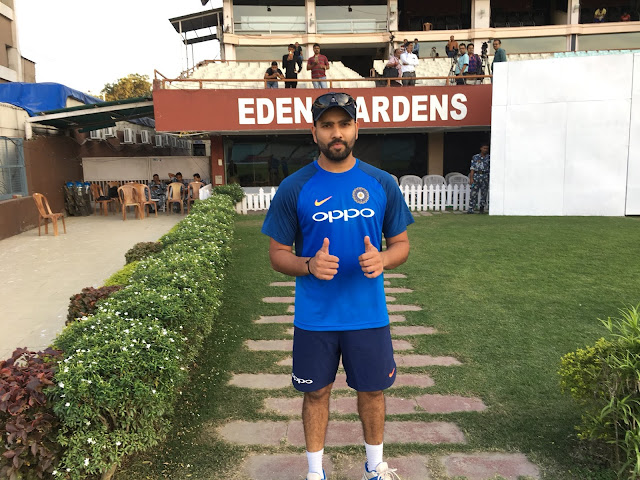 Rohit was the natural pick for assuming the captaincy role when Kohli decided to take a break from the ODI and T20 series against Sri Lanka. This was no mere accident. Apart from the fact that he was the senior-most player in the team, Rohit has also shown his captaincy capability in successive IPL tournaments. He is the only player to win the IPL trophy three times as captain, including the previous edition. Therefore, there is little doubt that Rohit was geared up for the task of leading the Kohli’s army in his skipper’s absence. But what should interest everybody is how his leadership skills have reflected in his batting approach. Previously, he would play a quick fire cameo and lose his wicket playing a rash shot only for the likes of Kohli, Dhoni, Yuvraj and Raina to finish off the task. But Rohit has assumed responsibility of the finisher’s role more frequently than before and that is the hallmark of a matured cricketer who has improved his game by leaps and bounds by doing something that doesn’t come naturally to him.

By Carl Jaison
Posted by Seasonal Magazine at 8:09:00 PM