The Other Semi-Final of WC Cricket 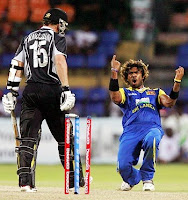 
Seriously folks, as the cynosure of all eyes would be on the script of Super Wednesday, it seems even the greats of the gentleman’s game have completely omitted from their minds a game that isn’t as flashy and hyped-about  as it’s succeeding one. Casual as it may seem, the above reference to the match as  a game clearly reveals the lack of spiciness involved in the first of the semi-finals to be played between the Lankan Lions and Kiwis. But with utmost respect, the game isn’t matching the wow and masala factor to be credited as a potential semi-final thriller. However, the fans of the respective teams would be hoping for a debacle to miracle.

Even as the two teams come face-to-face at the R. Premadasa Stadium, Colombo today, the minds of  all would be wandering at the next days mother-of-all-cricketing-battles. Maybe, just maybe, this would help the Lankans and  Kiwis to tighten their screws and gear up to the task of making the cricketing world realize that this match is no ‘silent spectator’ to Wednesday’s unfolding. The game has lost its charm because of the shock exit of South Africa which makes life easier for Sri Lanka, as they take on a less-menacing New Zealanders.

The first semi was predicted to be a face-off between the Chokers and the Lankans, but following the humiliating defeat of the former, Sri Lanka’s road to Mumbai would be cut short. Underestimating the Kiwis would be a sin of commission as they proved that they are giant-killers. But playing Sri Lanka in Sri lanka isn’t sweet sugar. If Kiwis miss a trick or two they are up for a sound thrashing at the hands of the previous edition’s losing finalists. Sri Lanka, having the likes of big match players in their ranks go into the match as strong favourites and their convincing victory in the quarter final against England underlines their unmatched supremacy.

On the other hand, one must take note that once a  party-pooper, will always remain a party-pooper and that’s just what the Kiwis will have in their main agenda: to spoil the Lankan celebrations. Easy to say, but hard to make an impact, Kiwis task will be cut out and any minute error here and there would cost them dearly. Many feel New Zealand must thank their stars for a place in the semis as not many billed them as title favourites. But that doesn’t underlie the fact that Kiwis are rubber-ducks. On their day they pose a notorious scare to any team that stands in their way. This is very evident from Sri Lankan captain Kumar Sangakkara’s description about their opposite number as being a team  that they wouldn’t take lightly and reaches out to his team-mates saying to give them respect and put up a good fighting display to book a ticket for Saturday’s mega finale.

New Zealand , however, is still haunted by semi-final ghosts as they have failed to make a cut to the finals in as many as 6 attempts. Keeping all the equations and speculations in mind, New Zealand are in for an even bigger scare if  by chance they crumble once again before the final hurdle. But what most worries former Sri Lanka’s world cup winning skipper, Arjuna Ranbatunga is the lack of quality matches played by the Lankans and the under-performance of their middle-order bats. True to say, by far, the Lankans haven’t been tested to their maximum. But the very tension-filled, semi-final atmosphere will surely make Sri Lanka pull up their socks and put up their best act yet. The Lankan middle order hasn’t had exposure to the crunch match situations and this has been the prime concern of the team management.

One small stutter means the Kiwis would pounce on the Lions (literally, what an irony!) and sent them back to their dens packing. But what the Kiwis will be most wary of is Malinga’s ‘Slinga’ delivery and responsible resistance shown by their skipper and vice captain, Mahela Jayawardena. Murali too can spring a surprise or two by pressurizing opposition with dot balls which would lead them to self-destruct.

Even Sri Lanka will find the magic of the charismatic and saintly Kiwi skipper, Daniel Vettori, difficult to penetrate. Jesse Ryder, Jacob Oram and their best bet, Ross Taylor, can cause havoc to Lanka’s chances of a smooth victory.

Nevertheless, the possibility of a one-sided drubbing is wide open but this match is surely isn’t dead rubber. This would be New Zealand’s best chance yet as they come into the match high on confidence and determination boasting of a stunning win over South Africa. As far as Sri Lanka is concerned, it’s now or never because Jayawardene, Murali, and Samaraweera are on their last legs and would definitely want to put up a splendid show before calling it a day.

Oozing the confidence from previous wins is very important  in such high-octane clashes as playing to your strengths holds the key to success. A victory in the limited 100 overs would provide a berth in the dug-outs of the Wankhede Stadium, Mumbai, and this just means a touching distance from reaching out for glory.
Posted by Seasonal Magazine at 2:10:00 PM