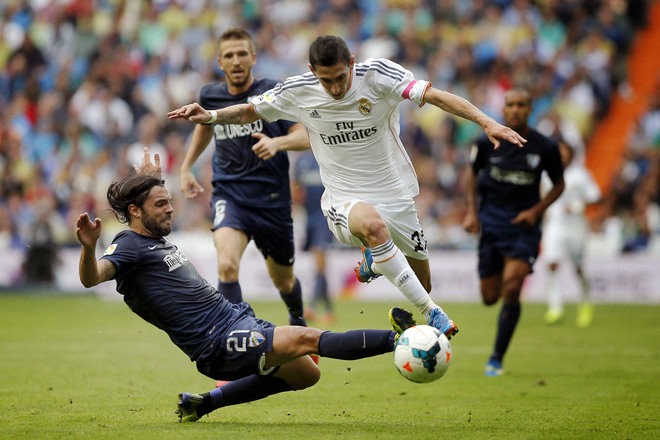 With barely a week left for the ball to start rolling in Brazil, the media and fan frenzy around the likes of Messi, Ronaldo, Suarez, & Neymar is going overboard. However, there is a great chance, as it has happened more often than not, that this World Cup too might create new younger heroes. Such players might not boast of an over-the-moon price tag. They might not have the paparazzi in pursuit. They might not have fans screaming and chanting when they walk on to ground. But when they start playing, its a completely different ballgame. Here are four such players who are undoubtedly not the men in the spotlight right now, but men who stand in the shadows and let their legs do the talking.

The youngster has had a phenomenal season with his club Real Madrid clinching the UEFA Champions League. He is definitely not their highest paid player nor the highest scorer but what Di Maria has done for Madrid has been truly applause-worthy. In 52 appearances for his club this season, he has found the net 11 times and his assists number up to 26. Not too bad for a midfielder. This is exactly what could lift Argentina and help them relive their long-lost zeitgeist of 1986. Lurking in the shadows of his star team-mates , Lionel Messi and Sergio Aguero, Di Maria’s energy and drive provides the skeleton of Argentina’s fiery attack. He is as important to Argentina as he is for Real Madrid. He might not be your typical playmaker but with his natural ability to penetrate and unlock any stubborn defence, he undoubtedly is Argentina’s trump card. Although he might not get his name on the score sheet very often, he opens up space for his team-mates and gives them the opportunity to drift past the defence and go for glory. Presently, he is in the form of his life and there will be no surprises if he continues this in Brazil and help Argentina lift their 3rd title.

To shine in a relatively weak team and help them win matches is good. But to shine in a strong team and to outshine his well-known team-mates is remarkable. And that is exactly what Reus has done for Germany. Blessed with great speed and talent, this bright lad is one of the hottest players in Europe and all the big clubs are lining up to sign him. A regular in his club, Borussia Dortmund, this 25 year old has done more than cemented his spot in the German side. Will Reus prove to be the missing ingredient that Coach Loew has been searching for since his appointment with the national side? Germany who lost out to champions Spain in the semi-finals of the last World Cup after thrashing old foes England and Argentina, will have nothing but revenge on their minds as they look to shed their chokers tag. Reus along with Mario Gotse and Toni Kroos have looked very threatening and can challenge the best of defences. Nicknamed as ‘Rolls Reus’ for his pace, Reus was voted as Germany’s best player at the end of 2011-12 season. Reus is a goal scoring midfielder who has tremendous pace with the ball. He is also a big threat from set pieces, with excellent shooting technique.

The Real Madrid man has been the most promising player for his club and he started off the season with power-packed performances. After humiliated by Brazil in the Confederations Cup final, the world champions see a saviour in Isco and the young lad has the potential to turn the tables for his country. Isco is considered to be one of Europe’s most sought after talents and his best days are yet to come. He will provide the extra pace and charge that the La Roja side are found wanting of late. A bright midfielder who has contributed handsomely by showcasing some eye-catching performances both for his club and country, Isco is shaping up to be a first choice backup and it is only a matter of time before he makes a stamp as a regular in the team. Although Isco might not be the favourite of his coach who has a wealth of talent at his disposal, but Del Bosque can and will use Isco as a secret weapon ahead of many crucial encounters. Watch out for this youngster as he is sure to make his mark in Brazil.

This young lad has been creating headlines when he was only 17 years old. The now 22 year old Gunner has amazed and stirred everyone in the English Premier League with his solid performances. With praiseworthy efforts Wilshere won his club an FA Cup title after a gap of 9 years. He has won a lot of hearts with his English gentleman face and football skills. Hailed as the great hope of the English team after their 2010 World Cup debacle, he debuted in his country’s next match and soon looked as though he could become the country’s next star. Born with good technique he is the most gifted player of Roy Hudson’s squad. Few believe that the current England team are major title contenders this time, but with the likes of the experienced Steven Gerrard , Frank Lampard, and Wayne Rooney in their ranks they definitely don’t look like easy pushovers. But history has been very cruel indeed for England. After a goal scored by them was disallowed, Germany went on to tharsh them 4-1 resulting in their elimination last time. England might not be the favourites but who knows? If Jack Wilshere and a few other youngsters stand up and perform along with the older players then anything is possible.
Posted by Seasonal Magazine at 10:40:00 AM