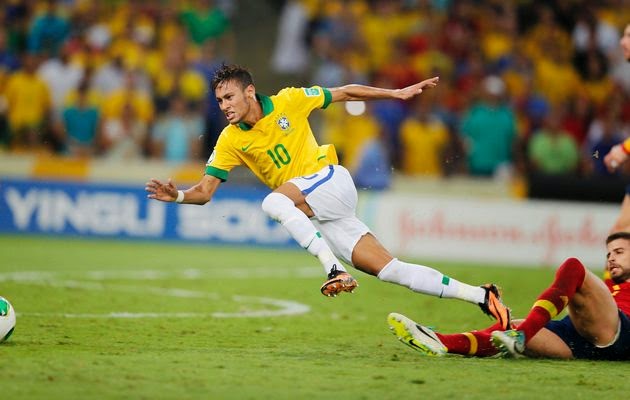 As the football world races through the world cup countdown, here is a rundown on four likely contenders for the Golden Boot. Who will it be - Messi, Ronaldo, Suarez, Neymar, or shockingly someone else? While reputation favours Lionel Messi, current form favours Cristiano Ronaldo, and the dark horse is invariably Luis Suarez, a slightly higher chance might be with Brazil’s Neymar, due to, of course the team in which he plays, and because they are the hosts this time. Anyway, one thing is highly likely. The Golden Boot is likely to be bagged by one of these four star players, and not anyone else.

Nicknamed as ‘The Flea‘ for his tiny figure, Lionel Messi who is considered to be one of the best players in this era looks all set to help his country sky-rocket back to its prime days. The Argentine has been more than a nightmare for the opposition team’s defenders by scoring goals effortlessly. Messi, who has not had the best of domestic seasons with his club FC Barcelona will be viewing World Cup 14 as the perfect platform to make amends for his lacklustre performances earlier this season. Robbed of the FIFA Best Player award by his rival, Cristiano Ronaldo, he will be itching to show everyone that he still is the world’s best and what better way than by scoring goals and more goals. Messi who has often been compared to the legendary Diego Maradona for his style of play, has never won a major tournament while donning the national colours, except for the 2008 Olympic games. He also has a challenge in outscoring fellow countryman Sergio Aguero who has been very clinical for his club’s performance this season. Messi has often been blamed by the fans and the media that he doesn’t give his 100 percent while playing for his country and next month’s world cup is what Lionel Messi will be eyeing to silence his critics.

This Portuguese superstar has had a memorable season in which he led his club, Real Madrid to Europe Championship Glory. The FIFA Player of the year will be all set to lead his country, Portugal in the world cup. The joint highest La Liga scorer and  highest scorer in Europe, Ronaldo is also set to be awarded the Ballon ‘d Or after a gap of four years. Blessed with great speed and power, the opposition team must be more than vary of him. His performances for his country has also been very applause-worthy after an amazing hat-trick against Sweden in their most crucial match in the qualifiers. A minor mistake or lack of pace by the defenders is all what Ronaldo needs to zoom his way forward and strike the ball with immense strength and the next scene will be Ronaldo celebrating his goal. However, Portugal are in a tough group with favorites Germany and two giant-killers, USA and Ghana.

The leading scorer in the English Premier League is Uruguay’s best bet in this final. Despite missing the first five games of the season, Suarez has 17 goals to his name in just 11 matches. A major goal-scorer from every position in the football field the Uruguayan has been in formidable form. He has already amassed two hat-tricks in the qualifiers and will be looking to carry his golden form into the World Cup finals. Uraguay has been slotted in Group D, which is the group of death. They will face stiff competition from previous world cup winners - Italy and England. As far as controversies are concerned, Luis Suarez certainly tops the chart. The condition wont be similar this time around as Luis Suarez holds a senior position in the side and is expected to be more responsible for his antics both on and off the field. The only way for him to stay out of trouble is to do what he does the best, score goals.

The Brazilian striker who has had a decent run this season with his club Barcelona will have a huge home-advantage over the rest of the contenders. Back at the Confederations Cup he was adjudged as the Best Player. Known for his defence-splitting runs and pin-point precision, Neymar will be one of the favourites to bag this award. The hopes of the entire nation will be on his young shoulders and it will be very interesting to see the manner in which he carries his team forward. Playing on home soil, the Brazilian team which boasts of a solid midfield will be feeding the ball to this youngster.  However the youngster has been criticized for delays to strike the ball and unnecessary footwork to baffle defenders. But when on song, this talented lad has been more than incredible and Coach Scolari cannot demand anything less than a goal fest from him.
Posted by Seasonal Magazine at 7:04:00 PM